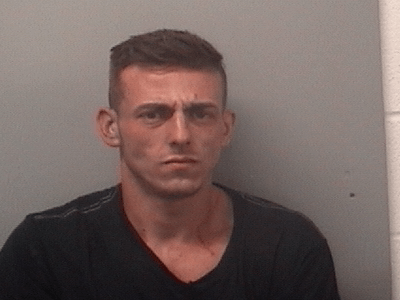 An Atlantic City man allegedly shooting up heroin at a downtown Paterson Dunkin’ Donuts on Saturday evening put up a struggle when a law enforcement officer attempted to arrest him on drug charges, according to Passaic County Sheriff Richard Berdnik.

Nicholas Bosna, 25, was allegedly injecting heroin into his body in the bathroom of the Dunkin’ Donuts at Market Street and Memorial Drive at around 7:15 p.m. Sheriff’s officer Scott Philips was at the coffeehouse and was alerted by an employee of the situation.

Philips observed Bosna with a syringe in his pocket and drug paraphernalia on the floor. He tried to put Bosna under arrest and a struggle ensued. Two civilians at the coffeehouse assisted the officer in handcuffing Bosna, authorities said.

Authorities said Bosna had 3 glassine envelopes of heroin. He refused to identify himself and it took authorities several hours to positively identify him, but when they did he was found to have several active warrants from Atlantic City for eluding, resisting arrest, and other theft charged, Berdnik said.

“I want to commend Correction Officer Philips for making this arrest. On behalf of the PCSO, I want to also thank the civilians and other Officers, including those working out of the Passaic County Jail, involved in resolving this situation,” Berdnik said. “No one should be allowed to elude police or attempt to cause injury to a member of law enforcement.”