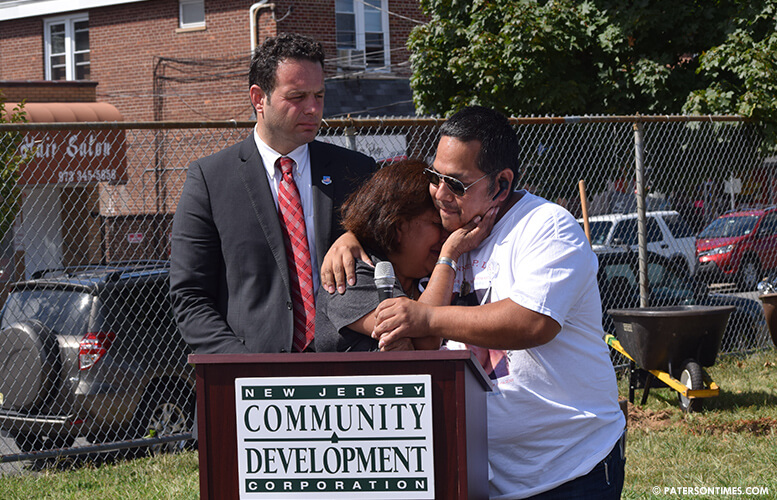 Kenneth Lira played baseball, tennis, and soccer with his friends at the School 25 playground as a child growing up in the leafy Lakeview section. He perished when terrorists rammed passenger planes into the World Trade Center 15 years ago.

His friends, family, and community gathered at the same playground to dedicate a Peace Garden and a pear tree in his memory on Sunday afternoon. Lira’s mother Marina Arevalo (pictured, center) was astonished to see hundreds of people at the playground to remember her son who perished at age 28.

“I had a great son,” said Arevalo her voice breaking with grief. “I miss him every single minute.” Her son worked for Genuity on the 107th floor of the south tower, said the family. He had been with the company for little over three years when the towers came crashing down.

A portrait of Kenneth Lira on display at the Peace Garden ceremony.

“I couldn’t fathom 15 years without my brother, but here I am,” said Michael Lira (pictured, right), brother to Kenneth Lira, almost tearing up. “It still hurts.” He said the two brothers were “tighter than glue.”

The mother and son spoke about their loss and pain in front of a silent crowd of roughly 200 people with some children audibly playing at the school’s playground.

“We are here for a neighbor and a friend,” said councilman Andre Sayegh. He attended the same elementary school — St. Brendan Catholic School — with the deceased Lira. He said the perpetrator of the 9/11 attacks sought to divide the United States, but ended up strengthening it.

Sayegh pointed to a diverse crowd that included Peruvians, Colombians, and Muslims. Just as diverse a group from the Islamic Center of Passaic County, the New Jersey Community Development Corporation’s AmeriCorps, Hijos Y Amigos De Colombia, and a local Peruvian organization volunteered to build the garden from 11 a.m.

The peace garden includes chrysanths, roses, and a butterfly bush.

“We are mourning as well,” said Omar Awad, president of the Islamic Center of Passaic County. His organization wasn’t the only Muslim group to assist in putting together the peace garden, the Palestinian-American Community Center also helped.

Just about every dignitary delivered a message of unity at a time when divisive rhetoric from Republican presidential candidate Donald Trump’s campaign seeks to undermine the prevailing harmony in America’s diverse cities.

“We’re not strangers. We’re Americans. We’re like everyone else,” said Diab Mustafa, president of the Palestinian-American Community Center. “This shows we are one. A lot of our kids are born and raised here.”

“A lot of his neighbors were Arab-Americans,” added Al Abdelaziz, who ran an abortive campaign for a city council seat earlier in the year.

“This is what we’re about,” said Phil Murphy, a former U.S. ambassador to Germany and a declared candidate for next year’s race for governor. “Terrorists have failed and they will fail.”

Lira worked as an engineer at the trade tower. His family hails from Peru. His mother was particularly moved by the words of Vitalliano Gallardo, consul general of Peru.

“Within one second. His life became part of the history of America. 15 years. We’re still missing him among us,” said Gallardo.