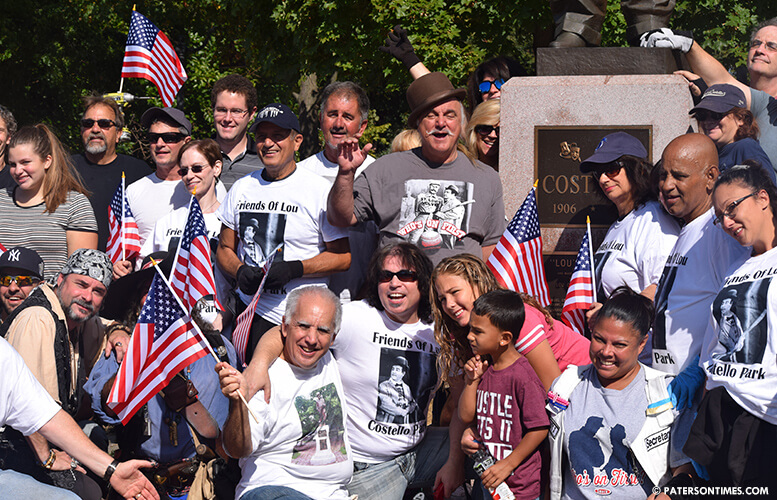 A group of diehard Lou Costello fans, armed with rakes and black garbage bags, descended on the Lou Costello Memorial Park on Saturday morning to spruce up the long-neglected green space.

Sal Rinella, a producer and actor, organized the clean-up, bringing out almost 50 people. Those people collected litter and trash from around the park stuffing them into black garbage bags.

A small group painted the bocce ball courts and the benches. The volunteers, who came from far and wide, to not only clean the park, but to honor the memory of their favorite comedian from Paterson.

“I’m a big fan of Abbott and Costello,” said Rinella, who is producing a new film “Good Friday,” which will very likely feature a scene in the park. “Next to Charlie Chaplin, he’s my guy. He’s a comedy genius.”

Rinella sees Costello as the second best comedian to ever walk the earth after Chaplin. Costello died 57 years ago, but his fans continue to adore his routines.

As the group gathered to take a group picture – taking a break from cleaning – a pedestrian walks pass saying: “Who’s on First?” The comedian’s most famous routine.

“Lou represents so much to me. Humor, quick wittedness – he’s historical,” said Dale Kilian, 54, of Brick Township. “I grew up watching him.”

“I love Lou Costello. He promoted Paterson. And I do the same as an actor,” said Randy DeOrio, a writer and actor, who starred in numerous television shows including “Law and Order.” DeOrio was born in Chicago, but grew up in Paterson, and continues to live here.

Robert Attanasia recalled when the city unveiled the Lou Costello statute more than two decades ago for the park under mayor William “Bill” Pascrell.

“The statute was covered in a white veil and the park was full,” said Attanasia, who has a monthly newsletter which has been running for 24 years covering all things Costello. The park sees hardly any visitors these days.

It’s mostly occupied by the homeless and drug addicts. “The community doesn’t exist anymore,” said Rinella as two pirates reenacted an Abbott and Costello comedy routine behind him.

The park was a centerpiece of the city’s Little Italy neighborhood. There’s a small Italian presence that still remains, but not as strong as it was several decades ago.

Costello is was an Italian-American.

The community of homeless wanted food for having kept the park clean when the group arrived to spruce up the park at the corner of Ellison and Cianci Streets. Rinella put them to work before he would be handing out donated bagels or key lime pies.

“They’re cleaning too,” he said.

Attanasia, who circulates the newsletter, attended the clean-up with his wife, Cathy. She said their children and grandchildren have been introduced to Costello’s comedy.

“We all grew up with this in the 1960s,” said Cathy Attanasia. “The humor was clean and funny.”

Robert Attanasia recalled the packed house when “Jack and the Beanstalk” premiered at the Fabian theater in downtown Paterson. He said this year marks the 80th anniversary of the two men teaming up to become the most popular comedy duo of the 1940s and early 50s.

“Lou represented Paterson,” said Alex Ortiz, a city resident. He said the city is doing a poor job representing him with a neglected park. “It shouldn’t be like this.”