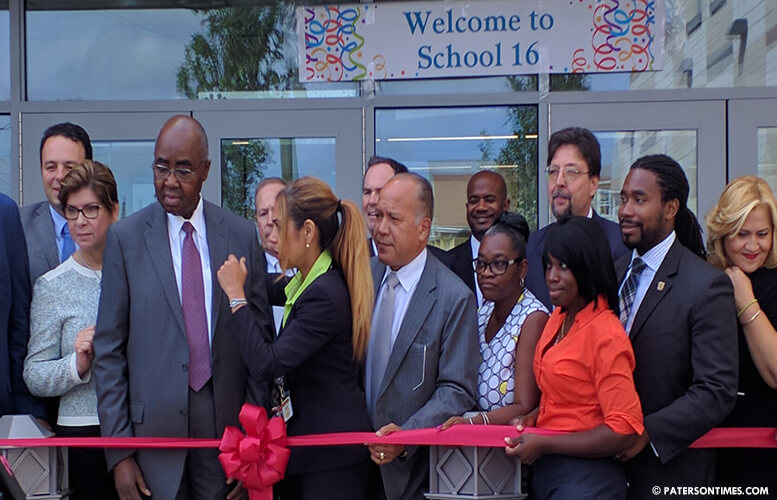 Officials from all levels of government celebrated the completion of the new School 16 on Tuesday morning with a ribbon cutting ceremony.

“This is a joyous day,” said school board president Christopher Irving. He was joined by federal, state, and municipal officials in celebrating the opening of the $62.4 million school located at 11 22nd Avenue.

“After too many years of delay, this school is reality,” said Rep. Bill Pascrell in front of several dozen students who attended the ceremony in the cafetorium of the new school.

Students also joined in on the celebration reading a poem written for the occasion. Students focused on the eco-friendliness of the building. The building is expected to be LEED Gold certified for having a sustainable green system that includes solar power, bicycle racks, and sensor lights in all classrooms.

State-appointed district superintendent Donnie Evans said buildings such as the new School 16 are needed to provide a 21st century education to students.

“A school is a building that has four walls and tomorrow inside,” said Evans quoting artist Lonel Watters. “We’re preparing our students for tomorrow.”

Evans also touted the “1-to-1 technology” for all students and staff. Students of the school are being provided laptops.

Pascrell told the students and the district to make sure the building stays as beautiful and clean as it is today.

“For too long Paterson schools have been in need of repair,” said mayor Jose “Joey” Torres. School 16 was one such school before the state demolished it and began building the new one in 2014.

The old School 16 was built in 1891. It had the infamous reputation of being one of the two oldest buildings in the district. It had no gym, no cafeteria, no library, and no auditorium, said councilman Andre Sayegh.

“They had sliding doors that partitioned the classrooms. You could overhear students doing physical education while you were trying to learn math,” said Sayegh, who represents the 6th Ward, where the school is located.

“School 16 was the poster building of all that was wrong with school facilities in the state,” said Sayegh, a former school board member. The new building includes a separate play area with playground equipment. There’s an artificial turf with soccer goal posts, a volleyball court, and a basketball court for students.

“We’re proud of this school,” said Charles McKenna, head of the School Development Authority (SDA). He said the building was constructed on time and on budget.

“The end result is an exceptional learning center that provides educational space and technology that all of these students will need to grow and become successful citizens of our country and leaders of the future,” said McKenna.

McKenna said governor Chris Christie’s administration has more schools in store for Paterson. He credited the city’s two education advocacy organizations for their effort in lobbying for the new schools.

Linda Reid, president of the Parent Education Organizing Council (PEOC), and Rosie Grant, executive director of the Paterson Education Fund (PEF), have taken numerous trips to Trenton to lobby for the schools in the overcrowded school district of almost 30,000 students.

“Use all the technology here and listen to your teachers,” Irving exhorted the students in the audience. After the ceremony students and official cut the ribbon on the new school building.