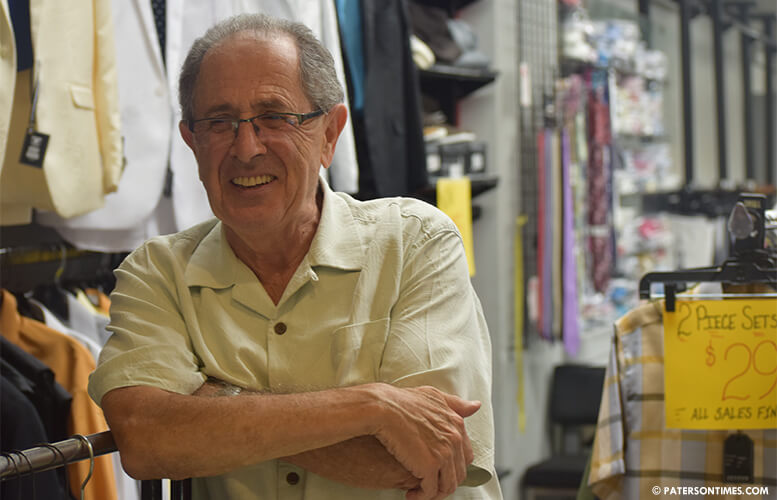 The Paterson Men’s Shop, a fixture in the downtown Paterson business district for 80 years, is closing in mid-October, said owner Michael Rosenthal.

Rosenthal, 74, said he’s retiring. He does not plan to pass the store down to his children. He has two daughters, he said. Even if he could pass the store to a family member he would not because of the economics of the professional wear business is such that an individual operating such a business would not be able to make ends meet, he said.

When asked if his business was turning a profit, Rosenthal said, “I pay my bills.” It’s clear the fortune of his shop declined with that of the city. He said he once had five employees working at the shop.

Now there’s one full-time and a weekend part-time employee at the shop, he said.

“The town as a retail town has diminished,” said Rosenthal (pictured). “It used to draw people from everywhere.” He said older clients, who moved out of the city, do not come to downtown to buy clothing. He said the city’s middle class or what remains of it also does not due to crime and lack of parking.

He said young people turning away from formal wear hasn’t helped. “People are dressing differently,” he said. “The young people dress like bums.”

Rosenthal began working at the shop at age 13 sweeping the floor for his father Milton Rosenthal. His father opened the shop on February 16th, 1936 selling suits, ties, shirts for weddings, birthdays, and funerals.

The son took over the business in the 1970s after serving in the Vietnam War. “Unlike Donald Trump, I accepted my draft,” he said taking a swipe at the presidential candidate. He also attended New York University.

Some of the famous customers to the business included singer Sammy Turner and boxer Ruben “Hurricane” Carter. Mayor Jose “Joey” Torres also buys his professional attire from the shop.

Rosenthal said few weeks ago the mayor visited the store to pick up some solid color work shirts. Other city residents also saw the Paterson Men’s Shop as the go to place for suits for important occasions.

Donald Lynch, a longtime city resident, lamented the closure of the business. He said the shop is where parents took their teens to purchase tuxedos for prom and suits for graduation.

“I can’t believe it,” said Kia Johnson, who owns a business in downtown called Boss Label T. Every time the family had a wedding or graduation her father would visit the shop to purchase clothing, she said.

“They’ve gone through generations with me,” said Rosenthal of his customers. He said some have come into the shop crying that he is closing up shop. His is the oldest family run business in downtown Paterson, he said.

His father lived on Broadway before moving to Fair Lawn, he said. The son lives in Haledon.

“This is the end of an era,” said Rosenthal.