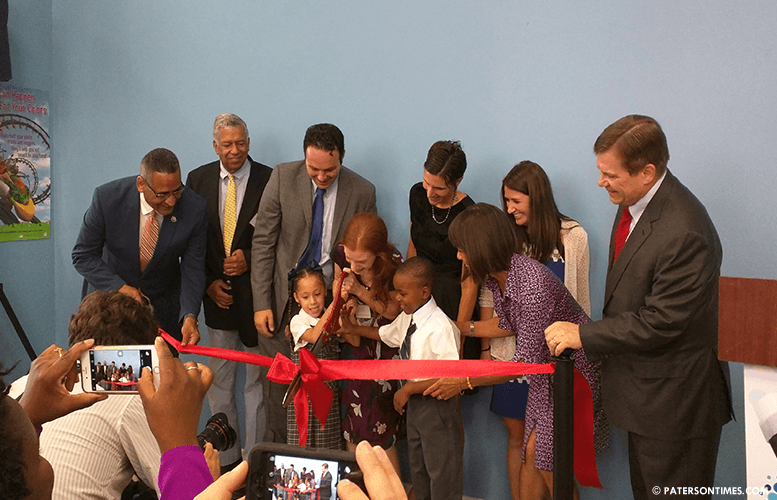 The city’s newest charter school opened at the Boris Kroll Mill Building with a ribbon cutting ceremony and five dozen kindergarteners marking the occasion with a memorable song that received resounding applause on Wednesday morning.

“We are the future, we have the power,” sang the children in front of a room packed with parents, teachers, and officials. “We are the agents — agents of change.” Those agents of change were selected through a lottery process that rejected most of the applicants.

60 kindergarten students were selected out of 250 to attend the Philip’s Academy Charter School of Paterson. Five-year-old Malcolm Mighty was one of the lucky ones, said his mother Andreca Frater.

“I felt like there was no hope,” she said. Then she entered Mighty into the Philip’s Academy Charter School lottery. He was given a seat.

Frater gave a glowing review of the school so far. She said the school held a community gathering prior to the lottery in which parents were provided information about the sort of education their children will receive.

The school describes itself as providing a “moral and rigorous” education to students.

“The same talents, the same potentials exist in every community in America,” said Miguel Brito, chief executive officer of Philip’s Education Partners. “It’s only when you give those children opportunity can we guarantee those potentials.”

Brito said he has heard of horror stories of dealing with the city’s government, but he was pleasantly surprised upon receiving warm treatment from both the municipal government and the state-operated school district.

“We’ve been treated royally,” he said.

Regina Lauricella, the school’s founding principal, said the school will be at the location for a year. She said presently there are 4 teachers, 2 teachers’ aides, an ESL teacher, and a co-curricular teacher.

Lauricella said the school has small classroom sizes which attract parents. There are 15 children per class, she said.

The school will add a new grade every year until it reaches third grade by the fourth year with an enrollment of 189 students, according to the New Jersey Department of Education. The principal said the school intends to keep class sizes to 15-20 students as it grows.

“We’ve had a great first month,” said Robert Shomo, father of five-year-old Bri’Asia Shomo. He praised the school for its free after school program and early bird program. He said he feels welcome when he visits the school.

“I always tell people it’s not my school. It’s their school,” said Lauricella referring to the parents and the students.

“They are taking away resources from our public schools. Only a small group of students go to charter schools. They are undermining the very foundation of other kids who are left behind,” said Kerr.

Charter schools will receive $34 million from the district this year.

“We have to find another way to fund charter schools,” said school board president Christopher Irving. “I still stand firm on parents having the right to choose where they send their kids.”

Correction (Sept. 29, 2016): A previous version of this report erroneously identified Robert Shomo as Peter Simon. Shomo is the parent while Simon is a member of the New Jersey Board of Education.