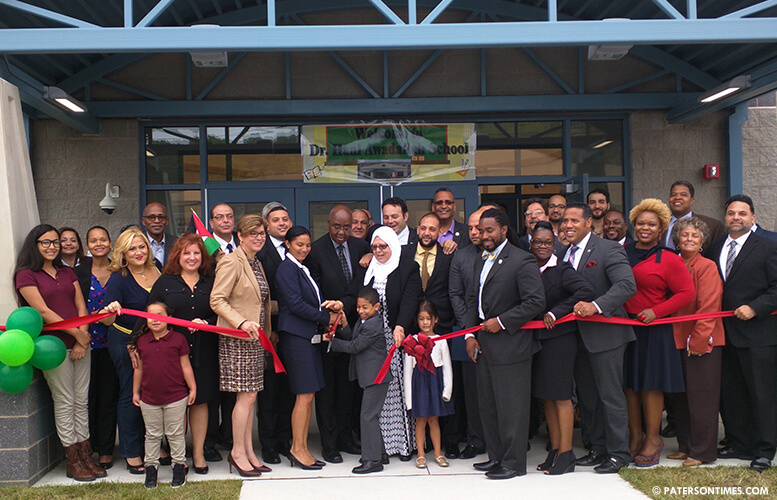 After more than a decade of delays and waits, the city opened its newest elementary school, the Hani Awadallah School, on Thursday morning.

“This is a state-of-the-art facility designed for 21st century learning,” proclaimed state-appointed district superintendent Donnie Evans. He said the building is equipped with wireless internet connectivity throughout.

Students will have access to a 3D printer, said the superintendent. School board president Christopher Irving said each student will be equipped with a laptop or tablet to provide a modern education.

The 105,500 square-foot school cost an estimated $55.2 million to build, according to the New Jersey School Development Authority (SDA). It includes 23 general, 4 kindergarten, and specialized instruction classrooms. There’s also labs, a media center, a gymnasium, a cafetorium, and a community room.

“Take as much as you can from this school,” Irving told the few dozen students at the ceremony. Students performed “America the Beautiful” for dignitaries at the cafetorium of the K-8 school designed to educate 720 students.

Some of the students also showed off their abstract paint works.

“Let this school serve as the engine for your academic success,” Charles McKenna, head of the New Jersey School Development Authority, told the school’s staff and students. He said he knew Awadallah.

“He was an incredibly passionate man,” said McKenna. Awadallah has been described as a tireless fighter for high quality education in the school district.

“Education was his focal point,” said Yousif Awadallah, son of the advocate who passed away in 2012.

The district paid tribute to the late Awadallah with a brief video presentation that showed him urging school board members and district officials to ensure students in the district are provided a decent education.

“A man who was a fighter for all children in Paterson,” remembered Irving. He said this might be the first school to be named after an Arab-American in New Jersey.

“This is the first time in America’s history that a school is named after a Palestinian,” said Andre Sayegh, 6th Ward councilman.

Awadallah immigrated to the United States in 1964 from Silwan, a neighborhood in Old Jerusalem in Palestine, said Sayegh. Awadallah’s family attended the ribbon cutting ceremony and donated pastries for the occasion.

“He truly believed in diversity,” said mayor Jose “Joey” Torres. The mayor said he has been on the receiving end of scolding from Awadallah. Officials described him as a fighter not just for the Arab and Muslim communities of Paterson, but the entire Silk City community.

“He opened the door for people like me,” said Al Abdelaziz, a Palestinian-American, who ran an abortive campaign for a city council seat earlier in the year. “I followed him and others follow him.”

Abdelaziz serves as the chairman of the Paterson Planning Board. The new school was badly delayed. In 2013, community advocates, marked the 10th anniversary of the state’s failure to provide the district a new school at the corner of Hazel and Marshall Streets.

The Paterson Education Fund and the Parent Education Organizing Council (PEOC) logged numerous trips to Trenton to lobby for the new school to relieve overcrowding at the district. McKenna recognized Linda Reid, president of the PEOC, and Rosie Grant, executive director of the PEF, for their lobbying effort.

Sayegh, who represents the area from which majority of the students hail, said the severe overcrowding at School 9 has been relieved by the new school. He said more than 400 students from School 9 have been moved to the new neighborhood school.