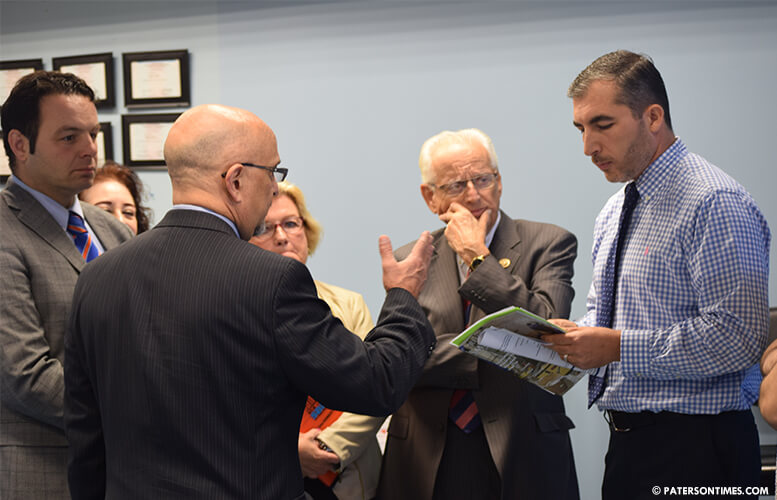 Amjad Abukaik showed off the different technologies Sheefa Pharmacy in South Paterson is utilizing to keep its customers healthy. His pharmacy uses an RX Safe system that prevents pharmacists from grabbing and handing the wrong medications to a customer, he told congressman Bill Pascrell who went on a small business walk in the neighborhood on Wednesday morning.

“We’re trying to save Medicaid,” Abukaik (pictured in checkered shirt) proudly told the congressman. He said he is doing that by reducing the number of times a person has to seek medical treatment. There’s dedicated staff at the pharmacy monitoring patients “drug interaction” by reviewing an individual’s prescription history, he said.

A lot of the technology he utilizes at his pharmacy could have been financed through the Small Business Administration (SBA) freeing up capital for him to expand business.

“They could have helped you finance it,” Pascrell told Abukaik pointing to Al Titone, district director for the U.S. Small Business Administration, New Jersey Office (SBA).

Titone said there’s a program at the SBA that assists small business in acquiring equipment for business operations.

“Neighborhood pharmacies are under attack,” said Pascrell. He said small businesses like Sheefa Pharmacy need resources and assistance to expand and grow.

Pascrell brought together a dozen people from federal, county, and local levels of government for his walk. He visited nine South Paterson establishments. Each business was given information on where to obtain small business loans, technical assistance, and other resources.

Brothers Mike Theb and Said Theb, who operate the The Nut House, a Middle Eastern sweets shop, were surprised to learn they could secure a business loan for just 3-percent interest.

“God willing. I’m going to call them,” said Said Theb. He and other business owners were given information packets containing a wealth of resources available to small businesses.

“You got to know all the programs that exist,” Pascrell told Jim and Albert Nouri, brothers who run the Nouri’s Restaurant.

Jim Nouri said he has received a small business loan from the Paterson Restoration Corporation to expand his footprint in South Paterson. The brothers indicated they have never received a loan from the SBA.

“People have no idea about the SBA,” said the congressman. “We bring the information to the people so they can make a judgment.”

Pascrell visited businesses on Main Street from Goshen Street to Michigan Avenue. As the congressman handed out information to the business owners some raised concerns about the big tax increases that hit them late last year.

The taxes on Abukaik’s pharmacy building doubled, he said. Others wanted to see the city do a better job cleaning up the area.

“I wish they could clean the streets,” said Nizar Nasser, who runs the Arabella Couture, a Middle Eastern clothing shop.

A lot of small businesses open, but too many of them close due to lack of resources, said Pascrell. He is hoping to keep small businesses alive by connecting them with available resources including educational seminars.

Kate Muldoon, regional director for the William Paterson Small Business Development Center, disseminated information about upcoming seminars the university is holding for businesses. The next seminar is on business plans and crowed funding.

Muldoon told businesses to stop by at the Small Business Development Center on Ellison Street for resources and information.

After the visit, Abukaik, the owner of Sheefa Pharmacy, said he plans to call the SBA and explore his options. He is particularly interested in refinancing his building.

“This is what Paterson is,” said Pascrell standing inside Nasser’s small business, “That’s why we got to keep them alive. This is our bread and butter.”

Pascrell has been conducting small business walks for the past 20 years, according to his staff. This is the first walk this year.