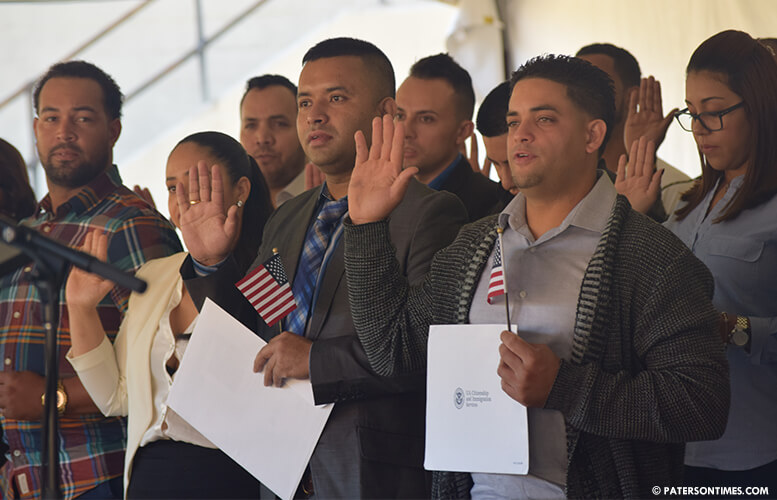 Makeda Jones emigrated from Jamaica to the United States as an eight-year old for a better education. She had a difficult time getting accustomed to an American school day and without home trips for lunch.

“It was tough dealing with school,” said Jones, a Passaic County Technical Institute (PCTI), who was cheered by her schoolmates when her name was called to walk up and obtain her American citizenship certificate. She said the school day in Jamaica was much shorter.

Jones is part of her high school’s Navy Junior ROTC program. A dozen of her friends were part of the ceremony’s honor guard. She was among 35 new Americans from 10 countries — Bangladesh, Colombia, Costa Rica, Dominican Republic, Ecuador, Jamaica, Mexico, Morocco, Peru, and Venezuela — who took their citizenship oath at the Great Falls Historical National Park on Friday morning.

“I’m the first one in my family to do this so it’s very exciting,” said Jones, 18, who plans on attending a military academy next year. She lives with her father and step-mother in Paterson. She left her mother, a sister, a brother, and her grandmother back in Jamaica.

“It’s tough, but they motivate me to come up here and do everything I have to do to support them,” she said. Jones is hoping to sponsor her mother and grandmother to bring them to the United States.

There was another immigrant from the Caribbean like Jones who founded the Silk City.

“This is the site of America’s first planned city of industry and innovation founded by Alexander Hamilton, an immigrant from the Caribbean in 1792,” said Darren Boch, superintendent of the Great Falls Historical National Park. “Our parks tell America’s story and today you will be part of America and these national parks will belong to you.”

The new Americans took their oath facing the sublime Great Falls that has become the symbol of New Jersey’s third largest city.

“Some of you may have come from big cities or rural towns, from different religions, but today, surrounded by the Great Falls of Paterson, you will raise your hand and take the scared oath that will unite you all as Americans,” said mayor Jose “Joey” Torres, the son of Puerto Rican immigrants, who is fond of pointing out Paterson, named after the second governor of New Jersey, was founded by an immigrant.

Torres delivered his speech to the 35 city residents in both Spanish and English. The ceremony featured the standard video speech from the current U.S. president welcoming the new citizens and a patriotic song — “America the Beautiful.”

The new Americans waved miniature flags as the song was played featuring a great compilation of quotes from famous naturalized citizens over videos and images of famous American sites and events.

“Throughout our history millions of immigrants have made the often difficult decision to leave their homes and come to the United States to build a new life,” said Kathleen Waldron, president of William Paterson University. “Though the countries where people come from has changed over the course of the nation’s history, the very fabric of the nation remains the same today: a beautiful patchwork woven by people from around the world who chose to come to the United States.”

Waldron’s grandparents emigrated from Italy in the late 19th century for economic and political reasons. Her grandmother came through Ellis Island as a child accompanied a teenage aunt, she said.

“She left her parents when she was five years old. She never saw them again,” said Waldron. Her grandfather emigrated at the same time. Her grandmother and grandfather met in Brooklyn, got married, and had eight children.

Her grandfather applied for citizenship in 1923, but was rejected. No reason was given, she said. “The papers my family still has does not explain why he was rejected for citizenship. We don’t know what happened. All we know is he was a hardworking man, he had a family, had some children, and had never been arrested,” said Waldron.

Her grandfather applied again and became an American. He went on to own a printing company in Brooklyn and brought his brothers from Italy to the U.S. Some of those brothers settled in New York and others in Paterson. His sons fought in World War II defending his adopted homeland.

He had 50 grandchildren before he died. “I’m one of those grandchildren and now I’m the president of William Paterson University. I think that is the story of the United States and I’m living proof of it,” she said to roaring applause at the ceremony attended by 200 people.

Waldron’s grandfather took his citizenship responsibilities seriously. He voted in every election after becoming a citizen, she said. The 35 new Americans will be able to vote as soon as next month.

Jones said she plans on submitting her voter registration form which came in the certificate packet soon to vote for Hillary Clinton.

Willie Reyaoso, 22, from the Dominican Republic, said he plans on voting next month as well. He said he has not decided on a candidate.

A U.S. Citizenship and Immigration Services (USCIS) official said the new Americans still have time to register to vote for their first presidential election on November 8th, 2016.