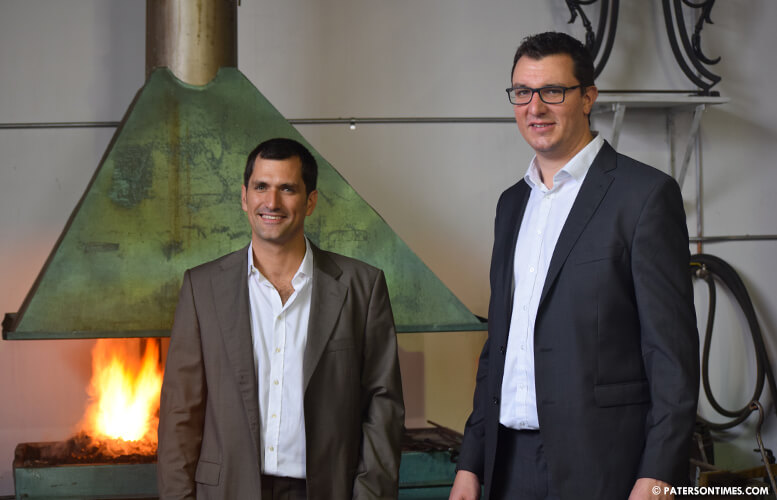 Jerome Bourly’s father founded Les Metalliers Champenois, a French firm that setup an affiliate shop in Paterson to recreate the flame and torch of the Statue of Liberty in the 1980s, but lost control of the city affiliate company in 2007.

A replica of Lady Liberty’s face.

The Paterson offshoot quickly fell in disarray filing for bankruptcy last year. Bourly was able to acquire the trademark, assets, tools, website, and marketing of the company through his Brooklyn-based affiliate Horus Bronze and re-attached it to the French parent company.

“My father was the boss until 2007,” said Bourly (pictured, right) on Saturday morning at a ribbon cutting ceremony re-opening the firm as LMC-HB. His father, Jean Bourly, founded the company in France in 1978, he said. His father created the affiliate company in Paterson in 1986 when the firm secured a $40 million project to rebuild the Statue of Liberty torch.

The company subsequently received a contract to create replicas of the statue’s face and left foot for the museum at Liberty Island. A replica of that face proudly hangs on the wall of the company’s East 23rd Street shop.

LMC-HB’s office and workshop at 23 East 23rd Street in Paterson.

Bonnet (pictured, left) provided a tour of the massive work-space the company acquired through a $1.6 million investment in the Silk City where 20 artisans work to produce metalworks that made the firm famous in America.

He explained the workflow from melting the steel in a furnace, forging it with ornamental designs, and applying finish.

“The simplest design is the most complex to fabricate,” said Bonnet. He pointed a complex patterned stairway railing stating it was forged by hammering steel where as a simple geometric design requires meticulous.

One of the artisans at the workshop pointed to a railing that he said used the same fabrication method as the Eiffel Tower. This is hardly surprising, the firm restored the 25-foot “Civic Fame” statue which sits atop the Manhattan Municipal Building. It also built the 49-foot-tall copper steeple for the Fifth Avenue Presbyterian Church in New York City.

The firm recreated a 750-pound vase at the New York Police Department from the original architectural drawings. It installed more than 650 ornate copper shingles on the dome of the Brooklyn Borough Hall. Restored general William Sherman’s statue in Central Park. Recreated a decorative door for the New York City Public Library.

“Most of our projects are confidential,” said Bourly, who is the president of the company. In the past, the firm’s clients included Madonna, Jerry Seinfeld, and Ralph Lauren.

“It’s a big deal for Paterson. An investment like that shows they’re serious,” said Sheri Ferreira, executive director of the Paterson Downtown Special Improvement District. With having purchased the building, the firm plans to stay put in the Silk City for the next 30 years, said Bonnet.

“Here in Paterson, we’re very well located, because we’re connected to a lot of suppliers we know,” said Bonnet. He said the city’s many highway links make it convenient to quickly transport goods.

“The New York area has always been an epicenter for high-end artisanship and companies like ours can seize tremendous opportunities to develop their art,” said Bourly, who flew in from France for the re-opening. “Being established and invested in Paterson made sense thanks to the proximity to New York and to the availability of local qualified manpower.”

The individuals employed by the firm are from the vicinity of Paterson. The firm though has previously had a strong apprenticeship program taking in city residents and equipping them with the requisite skills to work for the firm.

Company officials celebrated the re-opening with a ribbon cutting ceremony after waiting an hour for mayor Jose “Joey” Torres, who was expected to make an appearance. He appeared at noon for an honorary street naming at the corner of Straight and Market Streets.