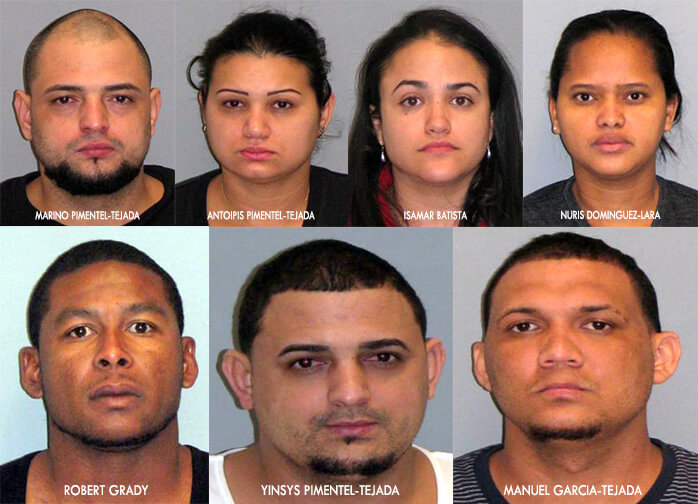 Three women and four men were indicted on Wednesday for allegedly distributing heroin and operating a heroin manufacturing mill out of an East 24th Street home, according to the New Jersey Attorney General’s Office.

The Pimentel-Tejadas and Batista were charged with second-degree maintaining a heroin production facility, first-degree possession of heroin with intent to distribute, and other offenses.

Grady is charged with second-degree heroin possession with intent to distribute and possession of methamphetamine, authorities said.

New Jersey State Police Trafficking North Bureau picked up Marino Pimentel-Tejada and Grady on June 1, 2016 for allegedly distributing large quantities of heroin in an area controlled by the ring in Paterson.

Both had 6,750 packets of heroin in 135 bricks when detectives arrested them as they met inside a car driven by Grady on East 28th Street. Grady also had several methamphetamine pills, authorities said.

State troopers searched Marino Pimentel-Tejada’s home at 1100 block of East 24th Street and his car. Five of the others arrested were inside the home at the time of the raid. Detectives discovered a table overflowing with glassines containing heroin and boxes of empty glassine bags.

79 grams of raw heroin, 3,791 glassines of heroin, grinders, sifters, a digital scale, empty glassines, and other packaging materials were seized from the home. In Marino Pimentel-Tejada’s car authorities seized $20,000 in cash, a handgun, and a shotgun inside a hidden hydraulic compartment. Marino Pimentel-Tejada was charged with three weapons offenses, authorities said.

State police seized 300 grams of heroin and more than $55,000 in cash in the investigation.

“When we take down a heroin mill such as the one dismantled in this case, we know we have struck deeper into the supply pipeline and have arrested large-scale suppliers,” said Attorney General Christopher Porrino. “Heroin is a scourge that is claiming far too many lives in New Jersey, and we will aggressively prosecute anyone who profits by selling this agent of death and misery into our communities.”

“All too often, these mills are not only responsible for manufacturing the poison that is heroin, but they are responsible for the violence that goes hand-in hand with drug trafficking,” said Colonel Rick Fuentes, Superintendent of the New Jersey State Police. “We will continue to shut these mills down, arrest those responsible, and work with our partners to ensure successful prosecution.”

Authorities charged the Pimentel-Tejadas and Batista with third-degree money laundering.

“Paterson is a major hub for heroin distribution, with many drug users and suppliers coming from across the northern suburbs of New Jersey to obtain heroin in the city,” said Elie Honig, director of the Division of Criminal Justice. “We’ll continue to work with the New Jersey State Police and other law enforcement partners to disrupt this deadly commerce.”