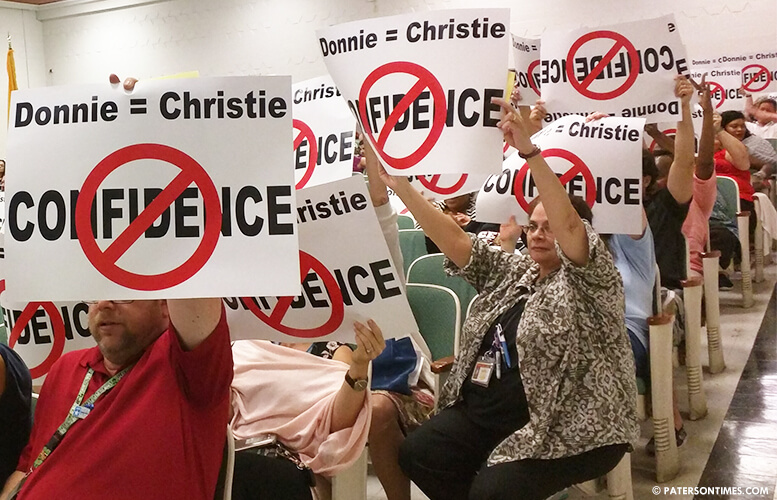 State-appointed district superintendent Donnie Evans was rebuked and reproved by more than 200 teachers on Wednesday night for his support of governor Chris Christie’s move to overturn the landmark New Jersey Supreme Court decision that continues to provide millions of dollars in education funding to poor school districts like Paterson.

Evans, who signed and submitted a certification used by the New Jersey Attorney General’s Office in a court proceeding to overturn Abbott v. Burke, was described as a betrayer. Longtime teacher Nancy Wymer described the superintendent’s move to back the governor’s education reform through his certification as an “unconscionable act of betrayal.”

“Instead of nagging the governor on a regular basis and calling him out for ignoring our children and bettering the district for seven years, you take his side? You have the nerve to fight us with the state supreme court. This is hypocrisy. This is betrayal. This only serves to underscore the contempt you have for the teaching staff,” said Wymer.

The longtime teacher was among 265 members of the Paterson Education Association, the teachers union, who demonstrated in the auditorium of John F. Kennedy High School.

“He is completely out of touch with Paterson schools. His certification to the New Jersey Supreme Court lends further credence to his plan to dismantle the foundation of our school district,” said John McEntee, president of Paterson Education Association.

The crux of Evans’ certification has to do with restrictive labor contracts that he believes make education reform difficult in the district. The superintendent’s certification, expert testimony in favor or against a case, is printed clearly on a document that lists the caption of the Abbott v. Burke case, dispelling any defense he was unaware of what the statement was being used for as some have argued.

“A fair reading of my entire certification makes it very clear that I am discussing these specific best practices and am in no way addressing the issue of the school funding formula,” Evans said in a statement after the union made public his certification.

Evans did not reply to any of the criticism hurled at him at the meeting.

“The certification to the court was the perfect opportunity to advocate for full funding for our schools. Instead of acting in the best interest of our students, Evans chose to court the bureaucrats that reward him,” said McEntee. “Congratulations, Dr. Evans, you now join a growing list of Christie appointees like Bill Baroni and David Wildstein to serve the constituency of one.”

Evans was appointed by governor Jon Corzine in 2009. His contract has been renewed every year under Christie’s tenure.

McEntee said the teachers rallied to show their strength. He dismissed those who have said the union is flexing its muscle as it looks to negotiate a new contract. The union president said the teachers’ contract does not expire until June of next year.

The union has sent communications to the district seeking to open negotiations for a new contract, said McEntee. However, both parties are not at the table at present, he said.

McEntee said the union has expressed its lack of confidence in Evans’ leadership through a no confidence vote during a delegate assembly meeting on Sept. 28, 2016. The month earlier the superintendent certified his statement. When the union learned about the certification it only vindicated teachers’ stance, he said.

The city has come out against the governor’s “fairness formula” which will reduce per pupil funding from the state by a third, say advocates. The city council this week passed a resolution decrying the governor’s formula as “unfair.”