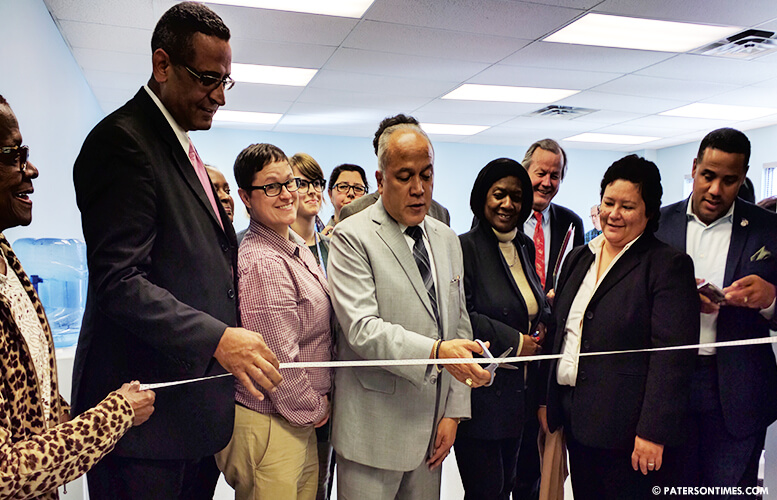 The city opened its much anticipated Paterson Virtual Library which is being touted as the first in New Jersey on Tuesday afternoon.

“Patersonians will now have access to a virtual library that includes access to various books, audio books, online magazines, and newspapers from around the world,” said mayor Jose “Joey” Torres at a ribbon cutting ceremony at 77 Ellison Street. He said the city’s virtual library is the first in New Jersey. He said this is fitting considering the city had the first public library in New Jersey.

“I think that is the first one in New Jersey,” said Chris Carbone, president of the New Jersey Library Association, when asked whether there are other virtual libraries in the state.

Carbone said there are libraries around the state that have online collections that can be accessed from a library, but none have a physical location that is dedicated for a virtual library. He said in that sense Paterson is the first in New Jersey.

The city is renting the second floor of the former Cablevision Studio for $300,000 per year for the virtual library. The new library opened with 15 state-of-the-art laptops to allow visitors to the location to mostly access job sites, prepare resumes, and craft cover letters.

The job and career assistance program at the location is funded by the New Jersey Department of Labor.

“We can work on resumes, cover letters, and the career connections websites allows people to look into new careers and any employment thing you can imagine,” said Rachel Paulus, a librarian who will man the new career center at the location. “If people are looking to further their education, change their career, looking for help to begin something come here. I’m here to help you.”

Paulus was hired specifically for the career connection program through the labor department grant, said library director Cindy Czesak. The location also houses a television studio which the mayor hopes to use to start a certificate program in partnership with the Passaic County Community College for those interested in media production or other related careers.

The former studio also has classroom space which is being subleased by the Paterson Public Schools to run an online diploma program for dropouts. The new career center program will not only serve adults, but also students and teenagers looking for jobs or volunteer opportunities, said officials.

“We can train and teach them about resumes and job search,” said Nelly Celi, president of the Paterson Library Board of Trustees. She said there’s also potential to use a jobs board to allow local businesses to post their job openings to the new locations to fill position with local candidates.