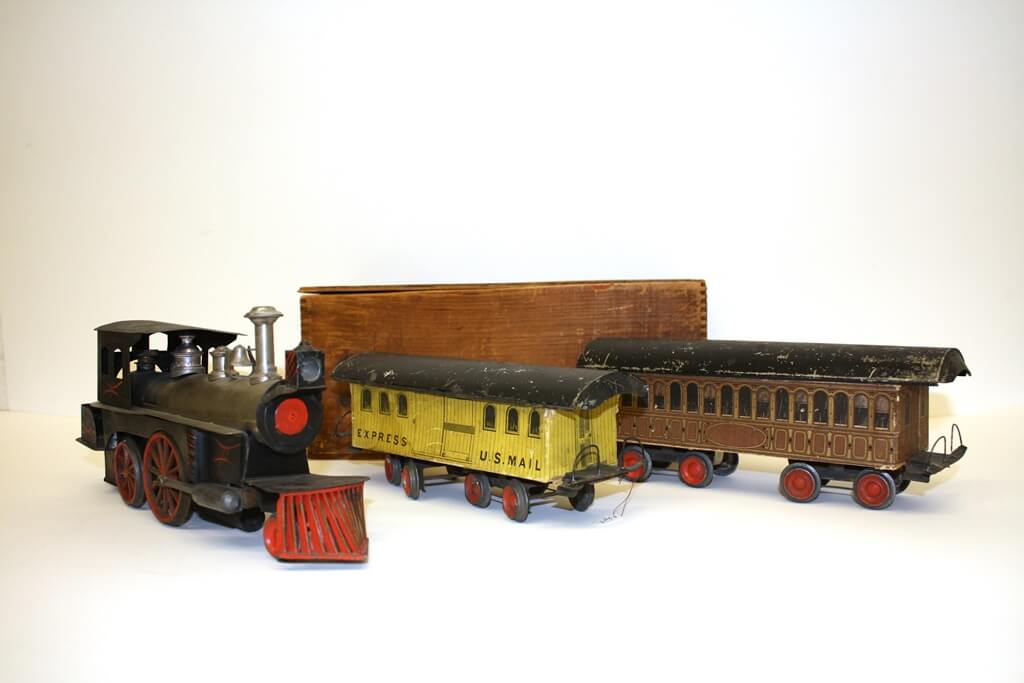 The first steam-powered and the first electric-powered model trains, both invented in Paterson, are on display in a new exhibit called “Toy World” which highlights the history of New Jersey’s toy making industry at the New Jersey State Museum.

Paterson is prominently featured in the exhibition for its contribution to New Jersey’s history of toy making. Eugene Beggs made the first steam-powered train in the city around 1871 (pictured), said Nicholas Ciotola, curator of cultural history at the museum.

“It’s the first steam operated toy train produced in the United States. And it happens right there in Paterson,” he said. The train required the user to fill the model’s boiler with water, fill engine tank with alcohol, and ignite to produce steam that turned the wheels and pulled the cardboard cars forward.

“It’s how real train operated at the time,” said Ciotola. “You’ve got alcohol, open flame, and cardboard, all as part of this innovative new toy.” Though the toy would fail modern child safety standards, Beggs produced the model for 37 years.

Beggs’ employee, Jehu Garlick, would produce a safer electrical powered toy train. In the 1890s, Garlick learned the Baltimore & Ohio Railroad had begun electrifying its locomotives which turned on a lightbulb in his head. He wondered what would happen if electrical current was applied to toy trains.

The electric-powered model train was built in a bike repair shop in Paterson. “He’s the first to produce an electric powered train in the United States,” said Ciotola of Garlick. This all occurred prior to the 1900 founding of Lionel Corporation which is remembered today for its toy train sets.

Beggs and Garlick’s companies no longer exist. “What happens to Beggs is technology passes him by. He doesn’t’ jump onto innovation and he doesn’t make the jump to electric power trains,” said Ciotola.

Beggs stopped production in 1910 when competition from electric-powered toy trains forced him out of business. He died in 1924 and is buried at the Cedar Lawn Cemetery.

Garlick continued to make trains in Paterson until around 1900. He was beset by competition. He also began to lose interest in train making.

“It’s competition from other companies that puts Garlick out of business,” said Ciotola. “They disappeared because of the rise of Lionel,”

Out of the train business Garlick becomes Paterson’s first automobile salesman as carriages were being replaced by automobiles on city streets.

Garlick died in 1944. There’s not much known whether the two men had a falling out or whether the departure was friendly. There may not have been a falling out since the technology was different, said Ciotola.

These two pioneers and other toy makers made the Silk City home because of its close proximity to New York City.

The city’s connection to major railroad lines allowed for raw materials to be brought in and finished toys to be brought out. The Durable Toy and Novelty Company, maker of Uncle Sam’s Bank, moved to Paterson in the mid-1940s, operating in the city for a few years before moving to Hackensack.

Uncle Sam’s Bank which was being produced in 1907 was a toy designed to teach children about thrift and saving. The toy locked after a 25-cent coin is deposited and does not open until $10 is reached.

There was also the Peg Lock Block Company. This firm made the toy block construction booklet which came with wooden blocks with small pegs. The booklet instructed users on ways to build drawbridges, mine elevators, oil derricks, and other tools of the industrial world, said Ciotola. The company was founded in 1913 and built a large factory at 311 Pennsylvania Avenue in Paterson in 1915.

The Gem Color Company started in the late 1950s in the city. It produced small mineral packets that were sold to Disneyland for resale as souvenirs. It also made construction toys with shapes of multi-colored wood with adhesives to hold them together.

The “Toy World” exhibit features 10 artifacts connected to Paterson. “Everything you’ll see in the exhibit is about a New Jersey toy company,” said Ciotola. “Paterson is one of the key cities in the exhibits.”

There are 200 different toys at the exhibit. “It’s not just about looking at the toys, it’s also the history behind the companies that made them. Not many people realize it, but if you purchased a doll from 1930 to 1960 it was probably made here in Trenton,” he said. “The largest doll making factory was located just steps away from the museum.”

Horsman Doll Factory built in 1930s was the largest toy factory in the United States.

“Toy World” opened on October 15th, 2016 and run until April 30th, 2017. The toys are on view at the Riverside Gallery on the second floor of the New Jersey State Museum located at 205 West State Street in Trenton. The museum is open Tuesday through Sunday from 9 a.m. to 4:45 p.m.

More information on the “Toy World” exhibit can be found at the New Jersey State Museum website.