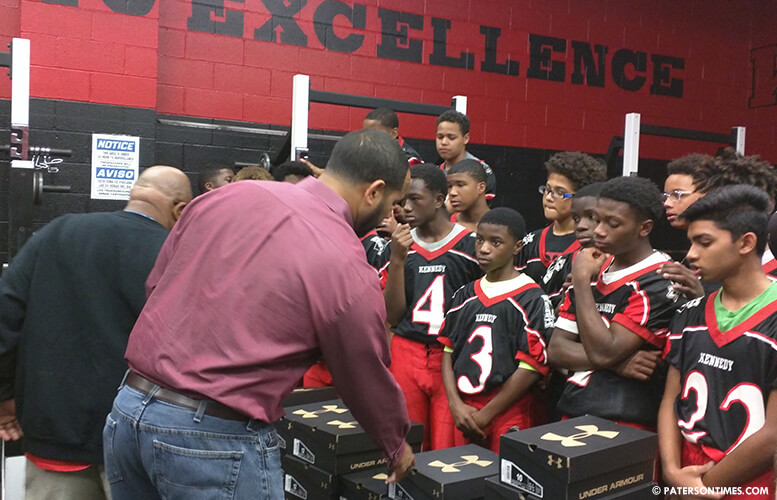 Councilman Michael Jackson distributed more than four dozen cleats to John F. Kennedy High School’s freshman football team on Friday afternoon in an effort to ensure athletes from his old high school have the right spikes to compete against other schools in New Jersey.

Jackson said he raised approximately $8,000 from local businesses and prominent individuals in the Silk City to purchase 100 cleats to not only equip the Knights, but also the freshman Eastside High School team.

“We don’t like to hear Paterson is not capable of competing. We know firsthand not only are we able to compete, but we’re capable of dominating,” said Jackson, who distributed the spikes with more than a dozen former Knights present inside the Kennedy weight room.

One of those Knights traveled from Kanas City to be at his old school supporting his old team.

“This is the foundation that let me go to college,” said Frankie Jacobsen, who played for the Kennedy team when the school won the state championship in 1987 – it has yet to win since then, according to coaches.

“These kids have more adversity than we did. I came out of the same weight room. If we give them the proper role models they can succeed in life,” said Eric Downing, who lives in Bloomfield, but has been volunteering to coach Kennedy students.

Downing said college would have been a distant dream for him without a football scholarship that took him to Coffeyville Community College in Kansas and ultimately landed him at Syracuse University.

When Jackson, who has been coaching the Kennedy team, addressed the 50 student athletes inside the weight room, he dropped college into his speech at least half-dozen times to communicate the ultimate long-term objective of high school sports.

“We got great kids that get distracted for little things,” said Jackson. He said the goal is also to keep the city’s students away from the street. “We’re trying to make a vehicle of opportunity available to them.”

Jackson, whose son plays for the Kennedy team from International High School, invited the alumni to serve as role model for the youngsters.

“He wants to bring everybody back into the community,” said Frank Bonadies, who served as head coach for Kennedy from 1984 through 2000, of Jackson.

Bonadies, who coached Jackson, was the coach when Kennedy won the state championship, he said.

Ron Jackson, the current head coach for the Knights, said the black Under Armour cleats will give his team an uniform look on the field. “When they all look as a team, we play better. When you dress good, you play good,” he said.

“For some this is their first new pair of cleats,” said the coach. He said the team just needs what every other team at every other high school in the state has to effectively compete.

“Just give us what everybody has,” said Jackson, the coach. He invited John F. Kennedy High School alums to attend this coming Friday’s playoff game at Bauerle Field to support the Knights as they go head to head with Passaic County Technical Institute (PCTI).