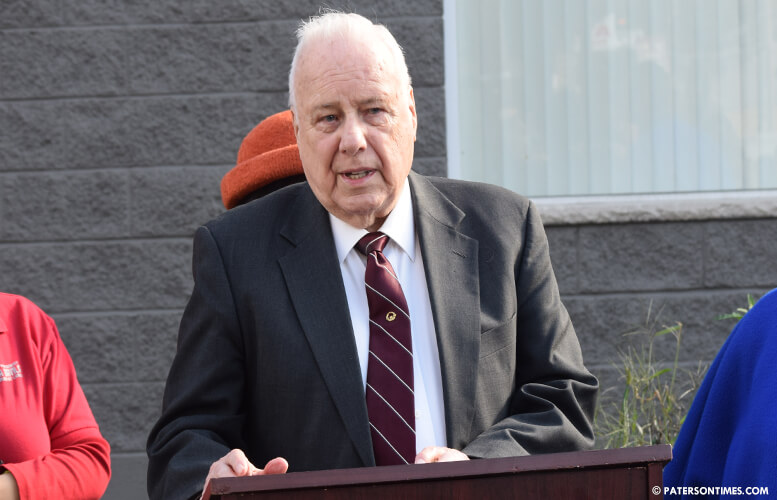 As he walked up to the podium to utter a few words to several dozen people who gathered just steps away from his home, Thomas Rooney wiped away tears at seeing the city he served for decades had gathered to pay tribute to him for his honest and right-minded service by designating his block Thomas Rooney Way.

“This is one of the special days of my life,” said Rooney, 89, on Saturday afternoon. “It’s a real, real honor to have this tribute.”

Speaker after speaker made mention of the integrity with which Rooney served city residents during his brief stint as mayor from 1972-1974 and his long tenure as councilman of the 6th Ward from 1980-2008.

“Your legacy is one of honesty and integrity. You are the epitome of a public servant,” said Andre Sayegh, who succeeded Rooney, the longest serving councilman in the Silk City’s history.

Rooney, who entered politics vexed at rising property taxes, opposed excess government spending and borrowing. He opposed tax abatements and pay raises. His 28 years on the city council was marked by fiscal responsibility. He also played a pivotal role in preserving the Great Falls by protecting it from developers bent on building affordable housing at the former ATP site, said mayor Jose “Joey” Torres.

“Other than family, the city of Paterson is the most important thing to him,” said Joan Gutkowski, Rooney’s daughter, who was among a dozen family members who gathered for the street naming. His friends left to the surrounding suburbs as the makeup of South Paterson began to change, but he stayed put a block from where he was baptized.

Rooney (pictured) has no plans to leave his old neighborhood. He continues to be active in political issues of the day. For example, he opposed last year’s recreation tax and had strong words for those seeking to honor former convicted mayor Martin G. Barnes with a stained glass window at the historic City Hall building.

“This is a living memorial, a living tribute,” said Torres, who unveiled the street sign. He said Rooney’s “contagious” passion and love for the city inspired him to run for office for a decade before successfully winning a city council seat.