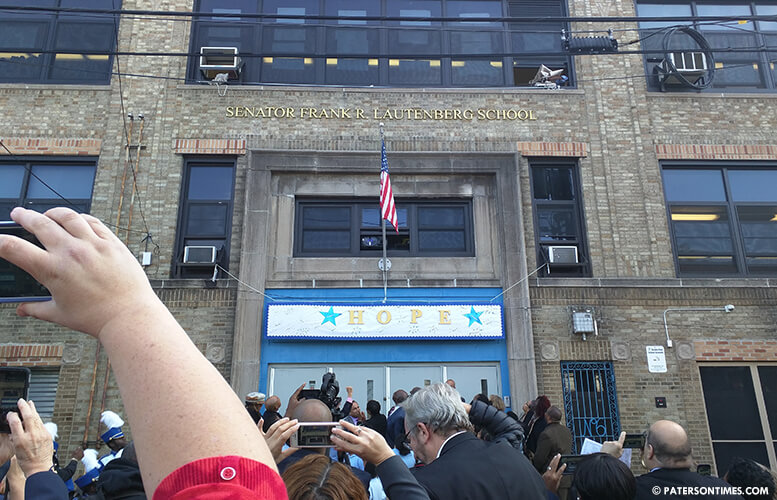 The School 6 student who went on to co-found the world’s largest payroll processing company and serve five terms in the United States Senate creating a national minimum drinking age, establishing a smoking ban on planes, denying gun ownership to people who committed domestic violence, and fighting for funds for commuter rail was recognized on Wednesday morning by his old school system with renaming his childhood elementary school to Frank Lautenberg School.

“My father truly loved Paterson,” said Ellen Lautenberg, the senator’s daughter. She said her father lived on Carroll Street on the same street where School 6 is located. Her father saw education as a way out of toiling in dangerous mills that reduced one’s life expectancy, said some of the speakers who attended the renaming ceremony.

“He supported this community and wanted to see the children of this school district be given every opportunity to learn, succeed, and ultimately, like him, reach back and help those who may still be struggling,” said state-appointed district superintendent Donnie Evans. He said students of School 6 can say, “He went to this school and became a United States senator and I can become one too. That is the type of inspirational role models we need for our children.”

School board president Christopher Irving said when all is stripped away Lautenberg is a Patersonian before all else. “His legacy will reverberate into the young people who walk through these halls,” he said. “The glory days of School 6 are coming back.”

The company that the senator co-founded, ADP, donated $25,000 to the school in the ceremony. “Frank was an incredible businessman,” said Carlos Rodriguez, chief executive officer of ADP. The company created tens of thousands of jobs in New Jersey and the United States.

“Frank Lautenberg was a giant. He came from this neighborhood,” said Rep. Bill Pascrell. He said he depended on the senator to get laws passed in the U.S. Congress.

The renaming was long overdue, said some of the officials. The school board approved the renaming resolution three years ago.