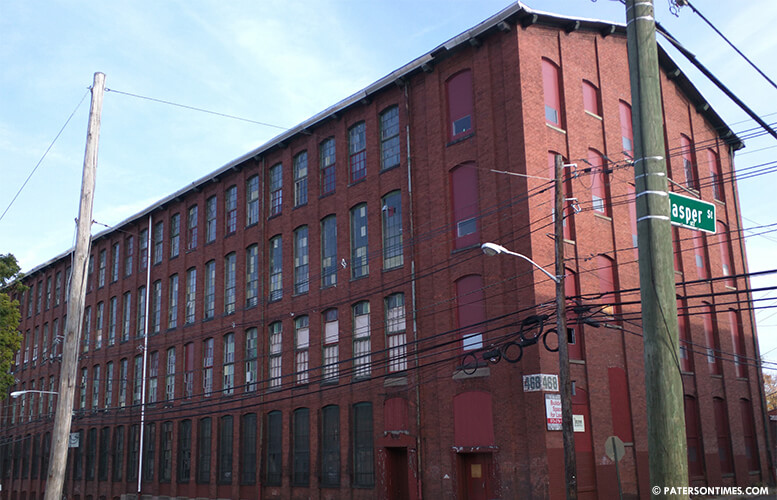 The city targeted the Art Factory building on Totowa Avenue on Wednesday afternoon for operating without a certificate of occupancy.

Almost a dozen inspectors from the city’s Community Improvement, Health Department, and Fire Department checked four floors of the massive former mill building located in the corner of Totowa Avenue and Jasper Street.

Inspectors found an allegedly illegal tattoo business called Ink Fanatics on the third floor of the building. The business did not have the requisite licenses from the city to operate a tattoo shop. The health department issued a cease and desist notice to the business operator who refused to sign the document and left the premises.

Police were called, but the operator left the building by the time an interceptor arrived. On the second, inspectors discovered a large scale wallpaper painting operation. Upon entry, the inspectors were struck by paint fumes.

The operator of the business, who refused to provide his name, assured inspectors he had permits to operate the business out of the location. He said he has been occupying half of second floor since 2009.

The wallpaper manufacturing facility did not have a certificate of occupancy, according to inspectors.

On the third floor, inspectors found mattresses that were stored there by Crib City and Teen City. An individual at the location said the business has been storing the mattresses at the location for the past three months after it left its Grand Street location.

The inspectors took photographs of each of the suites. They also captured photographs of an extension cable that was powering a dozen lightbulbs on the ceiling. Inspector Tyree Balmer pointed to the various issues at the building.

Balmer, who has been aggressive in writing tickets targeting allegedly illegal businesses, is leaving the city for a job that pays $20,000 more, he said. His colleagues call him the “King of Ticket Writing” for his aggressive ticketing.

David Garsia, owner of the Art Factory, said he will provide the city with a list of the businesses at the building. He appeared unhappy to see the inspectors a week after inspectors executed a warrant at his Spruce Street location.

Garsia said he has a meeting scheduled with mayor Jose “Joey” Torres to address the issues that have been plaguing his business for the past years. For example, late last year city inspectors shut down his operation on Spruce Street.

Though Garsia seems to have a number of tenants in both Art Factory locations, he owes the city more than $600,000 in taxes, according to a tax record check from last year. He said the fourth floor of the Totowa Avenue building was utilized by Victoria’s Secret for photoshoot last month. At his Spruce Street location it’s not uncommon to find big name artists recording music videos.

With so much in owed taxes, Garsia may not be able to obtain certificate of occupancy for his buildings without being current on taxes, according to officials.

Inspectors will issue summonses for Wednesday’s inspection of 466-480 Totowa Avenue. It’s uncertain how many tickets will be issued to Garsia. His tenants will likely be hit with tickets as well, according to inspectors.