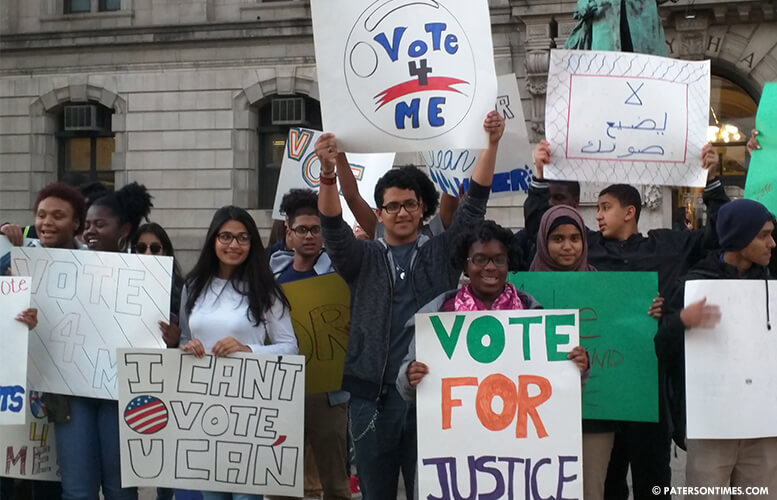 “Vote for us!” chanted the students as they circumambulated the statue of vice president Garret Hobart. “Vote for us — because we can’t!”

The students of the Paterson Youth Council, who represent all the city’s high schools and the Passaic County Technical Institute (PCTI), marched from the New Jersey Community Development Corporation (NJCDC) building on Spruce Street through Market Street to the historic City Hall to rally adults to the polls.

“They can’t leave this decision to other people. They have to take their responsibility seriously and vote,” said Bryan Diaz, 17, a student at John F. Kennedy High School’s School of Architecture and Construction Trades.

Diaz had a thorough understanding of the American Electoral College. Though their votes will not directly elect the next president of the United States, he urged voters to look out for local races.

“It doesn’t even have to be about the presidential election. Just go out there and vote,” said Diaz.

The 30 young people were not alone in urging voters to go to the polls, they were met by councilmen Andre Sayegh and Luis Velez who praised them for their effort to get voters to the polling sites.

Diaz said if he were old enough to have the franchise he would vote for third party candidate Gary Johnson. He said he would neither vote for Donald Trump nor Hillary Clinton.

“Since most of our kids in the program are under 18 and can’t vote themselves, they want people to come out and vote for the issues they care about,” added Matthew Schleifer, program coordinator of the Paterson Youth Council.

Diaz said the most important issue for him in this election is the economy. “The economy could get messed up, if we put it into the hands of a person who is not experienced, who doesn’t know how to handle things — we could all be in trouble,” said Diaz.

Diaz and others held up signs like “Vote for Justice” and “Vote 4 Me.”