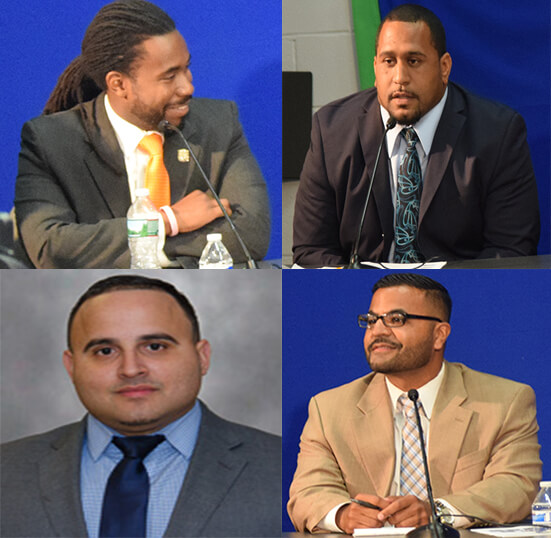 Incumbent school board members Kenneth Simmons and Errol Kerr suffered defeats at the polls in Tuesday’s election while challenger Emanuel Capers and Manny Martinez won seats. Christopher Irving and Flavio Rivera comfortably held onto their board of education seats, according to unofficial election results.

Martinez (pictured, bottom right), a former school board member and educator, was the highest vote-getter in the election with 9,587 ballots. He challenged Kerr for the two-year unexpired seat vacated by Kevin Michael Henry, who failed a criminal background check forfeiting his seat.

Capers (pictured, top right), the other challenger to win a seat, received 5,880 votes. Corey Teague came close to winning a seat with 5,562 ballots.

Irving, Martinez, and Rivera spent large sums of money in this year’s election. Irving came under criticism for spending large sums on billboards, multiple mailers that promoted both Martinez and Rivera without filing the requisite campaign finance reports.

Irving, who serves as the school board president, has not filed the required campaign finance reports showing the source of his funds. He held multiple fundraisers to raise money.

The winners will be sworn into to office in January of next year.