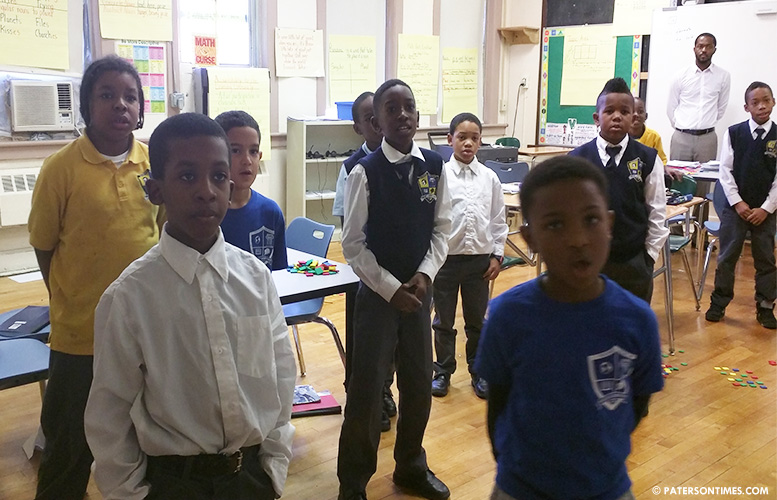 In between, the students recite from memory the school’s vision. A particular segment sticks out: the school’s war on excuses.

“There’s no excuses for you to not achieve academic success,” said Vernon Maynor, principal of the Young Men’s Leadership Academy, on Friday morning. He said the goal of the morning ritual is to engrave these principles into the minds of the students and pump them up for a lengthy day of learning.

Maynor, who was thrust into leading the school less than a year ago, has made character education the focus of his school. He takes pride in promoting healthy eating habits. He said students have been banned from having sugary drinks, chips, or lollops this year.

“I eat salads for dinner,” said third grader Jacquse Jones. “My mom, she buys a lot of strawberries and bananas, because I ask her to buy them.” He said it’s something he picked up from the school.

“They are too out of hand. They have students fighting in class, cursing at teachers,” said Shavon Randolph, mother of 11-year-old Nakeemm James. She’s not alone other parents have said just as much.

“I think there are some children that have behavior issues,” said Stephanie Quackenbush, whose eight-year old son attends the school. “I don’t know where they come from.” She defended the school and said her son likes the academy.

Randolph said the behavior problems stem from other schools using the academy as a “dumping ground” to send their most troubled students.

Quackenbush said behavior problems at the academy is no worse than any other school in the district.

“Behavior issues are a challenge for the school — not uncommon from other schools,” said David Fuentes, assistant professor for elementary education at William Paterson University, who has been working as professor in residence at the academy. “The school does have in place a positive behavior management system that should help address those issues.”

Maynor took offense to the school being described as a “dumping ground” by some parents and school officials.

“Every student who comes through this door every day, I look at them as my son, that’s what drives me. That’s what gets me up to come here and do what I do every day,” said principal. “At the end of the day, every child can change.” He said some have attached a “stigma” to the school by describing it as a “dumping ground.”

When asked if there were safeguards in place to prevent other schools from sending their troubled students to the school, Maynor said there’s an application process that requires recommendation letters, an evaluation of a student’s grades, and a meeting with their parents before admission.

Randolph said the disruptions in classrooms have created an environment that is not conducive to learning at the academy. She said she is attempting to transfer her son to the Alexander Hamilton Academy.

Maynor later said he met her in a mandatory parents meeting he called earlier in the month. He explained she has a different last name in school documents. He said he has been working to improve communications with parents. The school has a platform called ClassDojo to allow parents to see the day-to-day activities of their children. There’s also a Friday newsletter sent to parents to keep them abreast of things happening at the school.

The principal also called a mandatory morning meeting for parents earlier in the month. Randolph was unhappy with the meeting. She said the meeting turned chaotic with some parents cursing at each other.

“I didn’t hear cursing. A lot of parents are passionate about their children. When we get together and we talk, we’re trying to find solutions, sometimes they show their passionate feelings,” remarked the principal when told of Randolph’s description of the meeting.

Randolph said not all parents can be forced to a morning meeting in this working class city. The principal said some parents who could not make it called and met with the principal separately. She claimed many parents are pulling their students out of the academy.

The school began with 71 students in September and is down to 65, according to school officials. 2 of those students moved out of state and 4 transferred to other schools in the district.

A number of parents defended the school and thought it needed more time to show improvement. The school has been open for less than two years, said Leah Zeigler, mother of a third grader.

“Even entrepreneurs have hard time making a business successful in the first five years,” said Zeigler. “We’re talking about a school that has gone through change in administration.” She is optimistic the school will improve for the better and pull up its PARCC scores.

“The mission here is very lofty. The administration here is trying to make the classrooms very interactive,” said Fuentes. Students were on the floor comfortably doing math problems on Friday.

Fuentes said this is the third all-boys school in New Jersey. The school has extended day from 8 a.m. to 3:50 p.m. It also has an extended year going to the third week of July. There’s also Saturday programs that includes a drumline and various clubs, said the principal.

The parents are not alone in demanding a better school. Shamaree Gary, third grader, wants the family room at the school turned into a science lab. His classmate Jones wants the room turned into a library. The school currently does not have a library, said the two youngsters.

The morning ritual ends with the principal shouting to the student: