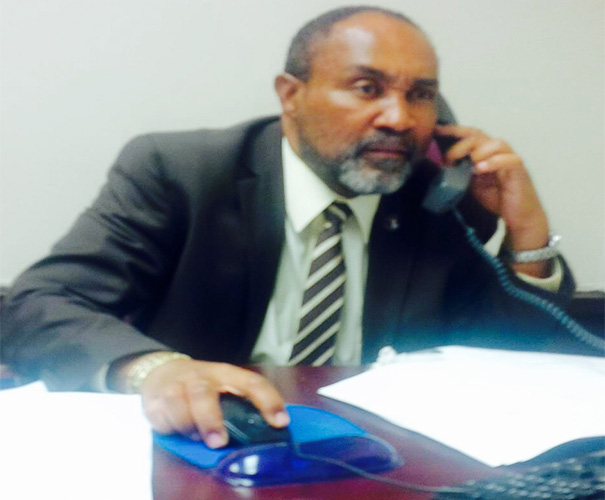 Mayor Jose “Joey” Torres’ constituent services hotline, re-instituted right after he returned for a nonconsecutive third term in office, has witnessed a spike in call volume.

Horatio McKoy, the man in charge of the hotline, says the volume can be explained by the speedy resolutions to problems residents have been receiving by calling the hotline. He said this is the first time in a longtime residents are receiving responses directly from the mayor’s office.

He said people are often surprised to receive a follow-up call from him to check whether their concern was addressed. “Nobody from the mayor’s office ever called them,” said McKoy. He provided statistics for the hotline which handles hundreds of calls per month.

McKoy (pictured) highlighted the past two July months to demonstrate the increase in calls. In July of 2015, 296 calls came into the hotline; in July of 2016, that number jumped to 406 calls. He said the three biggest complaints over the past two years has to do with problems surrounding vacant properties, drugs, and loud music.

McKoy said he takes down the residents’ concerns during business hours and relays them to the proper departments. He then follows up with the constituent to ensure their issue has been resolved.

In 2014, when the hotline began, he had a 69.8-percent resolution rate. Now, that number has jumped to 91.1-percent, he said. A number of residents have praised the hotline over the past year for quickly addressing their concerns at city council meetings and on social media postings.

What happens when someone calls outside of business hours? “When I’m not here it’s rolled over to a call center off site,” said McKoy. He said Torres wanted the hotline accessible to residents 24 hours a day, 7 days a week.

The call center takes down a caller’s information and concern and sends them to McKoy to address. When he returns to office, he sends them to the right departments for resolution. When asked if some of the department directors give him hard time when sending in so many issues, McKoy said he is a liaison carrying out a responsibility entrusted to him by the mayor and using his authority.

Torres had a similar hotline when he was mayor in the past. But the hotline was discontinued when he left office in 2010. A month after returning to office, Torres hired McKoy and re-instituted the hotline.

McKoy said the hotline avoids run around residents often complain about when calling to report a problem to a specific department. He said for some, the hotline has been such a successful way to address their concerns, that they have become repeat callers.