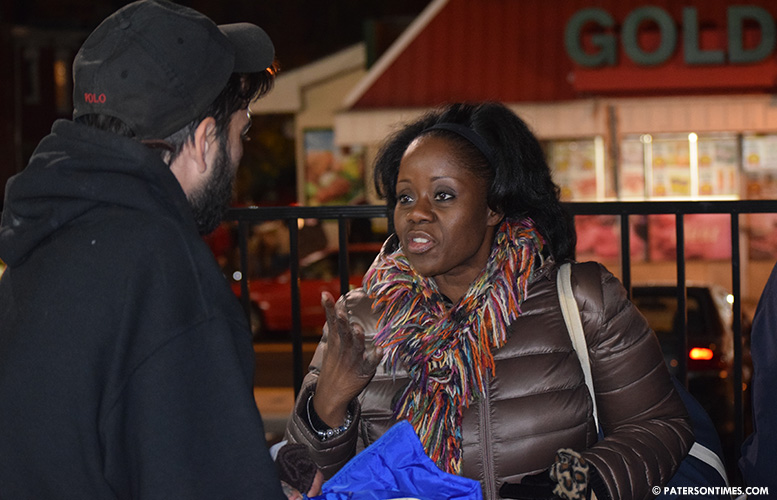 Sabrina Crichlow has been handing out gift cards to homeless people in New Jersey cities for the past three years. She was among a group of 11 people who hit the streets of downtown Paterson to distribute Dunkin’ Donuts and McDonald’s gift cards for Thanksgiving on Wednesday evening.

“It came to me three years ago,” said Crichlow of the idea to hand out gift cards. She thought, “If we gave them gift cards, they can go out and sit down with integrity with a cup of coffee, tea, get something to eat, and not be put out because they paid for their food.”

Crichlow said often homeless people are turned away from establishments as they are at places seeking food. “It hurts my heart to see people turn them away,” she said as she walked from the historic Paterson City Hall to the New Jersey Transit Terminal on Broadway.

The group from the Hackensack-based iNAY Ministry formed a circle outside City Hall to pray prior to giving out gloves, donuts, and coats to the needy outside the government building. One man, who sat almost motionless on a bench outside of the entrance to the City Hall, was handed a donut and given a pair of gloves.

Lenora Dorf, a bible instructor with the group, recited a prayer over the man imploring God to extend his bounty and protection to the man. She and the group found a woman on Washington Street, whose family had no turkey for Thanksgiving Day.

The group handed the woman a turkey. The woman, with a child in her car, profusely thanked the group for their generosity. The group found a homeless man inside the bus terminal, handed him a $5 gift card, and prayed with him.

As the group was leaving, Crichlow approached a police officer in middle of the road, to ask where she can find other needy individuals in the city. The police officer told the Clifton resident there’s many on Broadway by White Castle.

“Do not go beyond the White Castle,” warned the police officer. “You can go beyond it, but at your own risk.”

“10,000 angels are protecting us because we love and fear the lord,” uttered Dorf. The group was met by half-dozen drug addicts at the entrance to the White Castle. Each of the homeless were provided gift cards, jackets, and gloves.

The addicts, mostly able-bodied, likely all under 35 years of age, prayed with the group. One man approached the group seeking $5 to purchase train ticket to ostensibly visit his family in South Jersey for Thanksgiving Day.

Crichlow’s team offered the man donuts which he refused. He was panhandling on Park Avenue on Thanksgiving Day.

The gift cards make it difficult for drug addicts to use the money to secure their next fix.

“You make somebody’s day. It warms their heart; it warms your heart,” said Jen’e Davis, 50. She lives in Hasbrouck Heights. She recalls being rendered homeless as she was recovering from a medical injury.

“You should not keep blessings, but distribute it,” said Davis. The group distributed 50 gift cards on Tuesday and about a dozen or so on Wednesday.

Crichlow said the group plans to hand out 300 gift cards to the homeless in Newark and Paterson this year. She and the group will hit the streets of Paterson on Christmas Eve, she said.

“Our goal is to go out and help others,” said Crichlow, who founded iNAY (it’s not about you) Ministry in 2011.