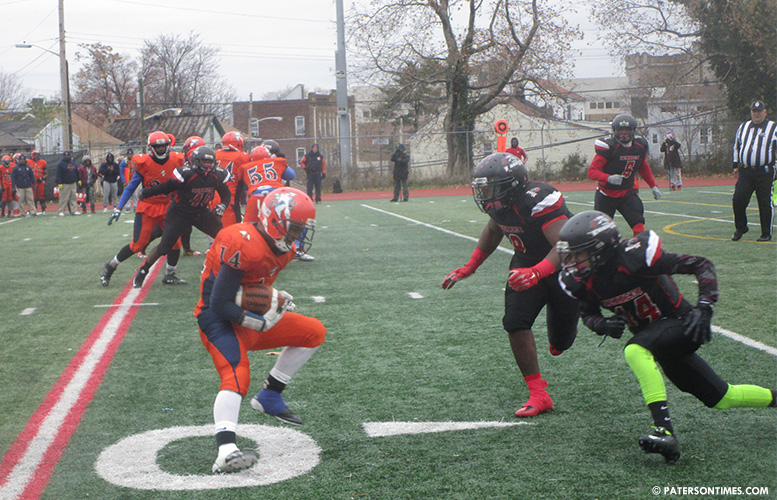 For the 92nd time John F. Kennedy High School and Eastside High School battled it out on the gridiron for Paterson’s annual Thanksgiving Day skirmish.

Present at this year’s contest was an impressive array of both Kennedy and Eastside football alumni. Many of the former players competed against each other when the contest was held at Paterson’s historic Hinchliffe Stadium. The brotherhood that belongs to one of the longest high school rivalries in the nation includes present Kennedy’s head coach Ron Jackson.

Before the 2014 contest, veteran Paterson educator, Al Moody reminisced about the dynamic electricity of yesteryear. Moody starred as a junior and senior for Central High School, later renamed Kennedy, in 1963 and 1964. Both games were played before thousands of fans at Hinchliffe Stadium. 1963 marked the 40th time the two schools had played on Thanksgiving Day.

“Hinchliffe was packed for the games.  Everybody in Paterson was there.  It was unbelievable,” Moody said.  “From the Walnut Street side of the stadium to the next side, were the Central fans.  On the other side were the Eastside fans.  Many who attended wore their school colors.”

Moody started at both offensive and defensive tackle in both games. Another Silk City Turkey Day gridiron alumnus is Ray Lyde, whose senior season was in the year 1957.

Many participants in the annual showdowns went on to play at collegiate and professional levels. Only a few names among the ‘Who’s Who of football greatness from Paterson include former standouts Shawn Collins, Shelton Prescott, Ronald Thomas, Devon McDonald, Zatiti Moody, Ray Lyde Jr., and Dikeri Mims.

Highlights of the Knight’s (Kennedy) 2016 season included a shutout win over Dickinson of Jersey City. Impressive victories over Passaic and North Bergen were complimented by a near-win against perennial state playoff contender, Hackensack. The Ghosts prevailed in matchups against Bergen Tech and Passaic. Eastside is coached by long-time Patersonian Ken Eatman, who helped found the city’s highly successful junior football league, the Silk City Cardinals.

This year’s contest featured a game that was much closer than the final score indicated. The Knights and Ghosts were locked in a ferocious defensive standoff for the entire first half.  Offensive highlights were few, as punts, penalties, and power tackling prevailed.  The Kennedy defense was led by senior stalwart defensive linemen William Lyde Jr. and Abraham Ramirez.  Against the tough Knight secondary, elusive Eastside quarterback Jahmiek Wilson was often forced to scramble, unable to find open receivers.  Showing tremendous athleticism, the talented junior signal caller racked up considerable yardage for the day.  However, the Knight defense bent, but did not break.

In a first quarter spectacular showcase, Eastside 6’4” 245 pound senior defensive tackle Tyrese Holland broke through the Knight line and tossed the Kennedy quarterback for a huge loss. The ball squirted loose. Holland picked up the pigskin and lumbered 30 yards for what seemed to be a touchdown. However, the play was ruled dead which negated the fumble and the score.   Eastside’s Dijuon Outerbridge then blitzed from his defensive secondary position for another Ghost sack.  In a microcosm of the first half, the surge was more than answered by the Kennedy defensemen.

A play which was characteristic of the entire game occurred early in the second quarter. With a crack that could be heard all the way to Market and Madison, Knight left cornerback, Wisom Solameh, collided with Eastside’s wide out Miguel Gonzalez, the moment the latter snatched a sideline pass. Fortunately, following the devastating hit, both players were able to slowly rise to their feet and continue play.

The defensive struggle resulted in a 0-0 tie at the second quarter horn.  Halftime activities featured a magnetic performance by the Kennedy drumline, dance team, and flag corps.

Any offensive doldrums the capacity crowd at Paterson’s Barule Field may have felt were immediately shook off at the opening second-half kickoff.  Kennedy’s Calvin Clyburn received the ball and jetted up-field.  Following a wall of blockers, the fleet sophomore skated left and headed up the sideline.  Despite a furious Eastside presence, the fleet junior narrowly eluded a host of tacklers for the touchdown jaunt.

Eastside responded with a nice kickoff return of its own to midfield.  However, led by Kennedy junior lineman Justin Laurano and left linebacker Alojuwon Bell, the Ghosts’ running game was again stymied.

Later in the half, Wilson lofted a beautiful, long bomb rainbow down the left sideline for Intended recipient, Ghost senior Ramir Tann-Davis.  In a dramatic, defensive duel, the star receiver desperately jockeyed with Kennedy defender Ya’zeir Francis.  The nod went to the Knights as the ball tantalizing slipped out of Ramir’s hands.

Kennedy’s offense showed signs of awaking from slumber with a pulverizing 40-yard burst up the middle by senior running back Jameir Taylor. The play culminated with the bulldozing senior carrying at least three Eastside defenders on his back for the last five yards. Taylor then bounced off left tackle to hit pay dirt for the second Kennedy touchdown. With 2:00 left in the third quarter, the Knights held court, ahead by a score of 12-0.

The fourth frame featured more defensive dualism, with both sides grudgingly giving up yardage. Kennedy scored two more TDs in the waning moments to cap off their 26-0 victory.