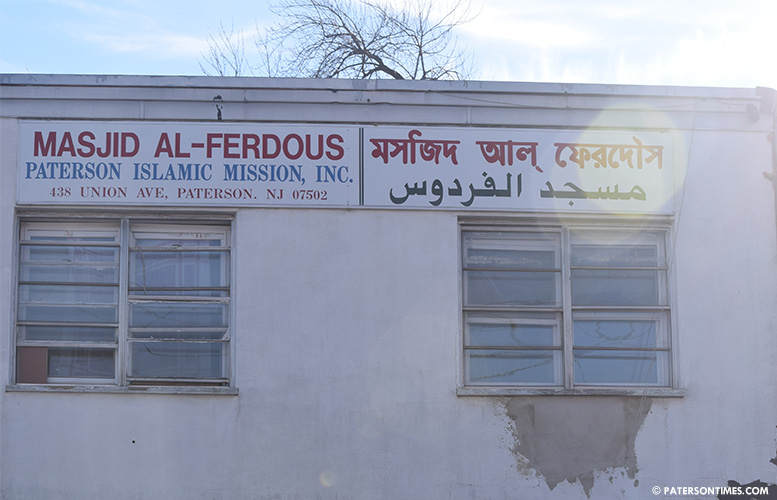 The city is citing a Union Avenue mosque for electrical and building violations after an inspection led to the discovery of allegedly illegal electrical work and improvements at the two buildings owned by the Paterson Islamic Mission, according to government officials.

Fire officials cited 436 Union Avenue, the building next to the mosque that houses Sonali Exchange, a remittance transfer shop, for five violations including “unsafe structural condition” on Thursday afternoon.

The structure was deemed an “imminent hazard.” PSE&G disconnected electricity to the building.

“It’s wrong. We were trying to correct it,” said Aziz Rahman (unrelated to the author), secretary of the Paterson Islamic Mission, admitting the issues at the building owned by the mosque. He noted the mosque remains open, but the building next door containing the shop was closed on Thursday evening.

Neither the mosque nor the building next to it with the shop had the required certificate of occupancies, according to city officials. Rahman disputed this and asserted both locations have COs. He provided a copy of certificate of continued occupancy (CCO) for 436 Union Avenue.

Rahman said the mosque submitted a plan to the Paterson Board of Adjustment a year ago to rectify and correct some of the issues at the building including the makeshift structure at the back.

Inspectors also found dead bodies inside refrigerators at the site, according to officials. This led to questions whether the location is allowed to store bodies in refrigeration. A funeral home owner said mosques and synagogues tread a “gray area” in the law that allows them to ritually wash and prepare bodies for service under the watch of a funeral director.

Rahman said the mosque works with community funeral homes. He said bodies are temporarily held for washing and service, but noted at the time of the inspectors’ visit there were no bodies at the location. He also said the mosque does not embalm bodies.

“That sounds like a traditional model,” said Adam Guziejewski, deputy executive director of the New Jersey State Funeral Directors Association. He said when a funeral home is involved it assumes custody and is responsible for the body.

The funeral home handles the disposition once the washing and service has been completed, indicated Rahman. City officials wondered whether the mosque requires a permit of some sort to store the bodies. Guziejewski said he is not aware of any such licensing requirement, but suggested contacting the New Jersey Department of Health.

The mosque has 30 days to correct the violations. Community Improvement division inspectors returned to the site on Friday morning and will likely cite both building for operating without certificate of occupancies and issue violations for the allegedly illegal structure at the back of the shop.

“We want to help them to operate legally just like everybody else. There’s no one being targeted. This is nothing out of the ordinary,” said David Gilmore, director of Community Improvement.

Rahman and mosque officials were scrambling to figure out what to do with the tenants living on the floor above the shop. The landlord is responsible for relocating or providing housing for the tenants.

The electrical issues were discovered while PSE&G was performing work on Union Avenue between Redwood and Albion Avenues yesterday.