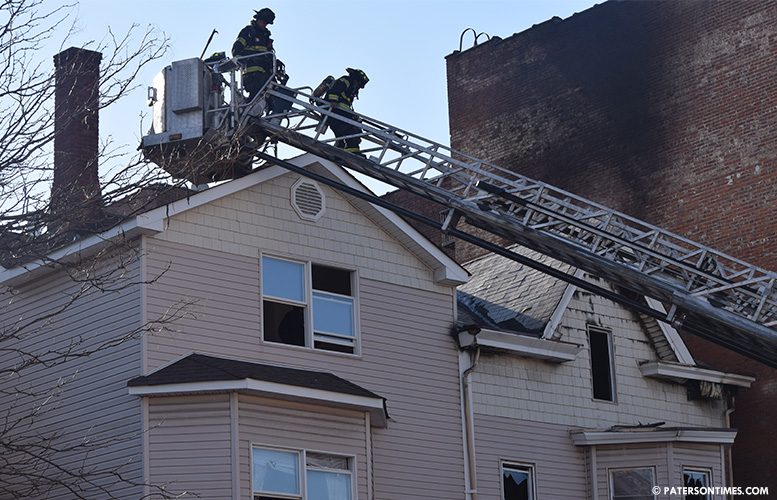 A single-alarm fire at a home on Broadway claimed the life of a dog and displaced 13 people on Thursday morning.

Firefighters found heavy flames on the second floor of 286 Broadway at about 11:31 a.m., said deputy fire chief Frank Calamita at the fire scene. He said firefighters were able to extinguish the blaze at the duplex within 30 minutes saving the buildings on both sides.

The blaze was prevented from extending to 288 Broadway, the other half of the duplex. Flames blackened the side of 282 Broadway, a five-story apartment complex next door to the impacted structure.

The five-story brick building did not sustain damages from the fire, said officials. Firefighters pulled out a propane tank from the third floor of 286 Broadway, said the deputy chief. The cause of the fire is under investigation, said Calamita.

Jasper Davenport, who lived on the first floor of the building damaged by the fire, said he left his home to do some grocery shopping. “I just came back from the store,” he said. He found the street blocked and his entry to the building denied.

Davenport said he left his cellphone behind and was not being allowed in to retrieve it. “I got to find a place to live now,” he said. He and the other displaced residents will be assisted by the American Red Cross, said officials.

Davenport was waiting for the American Red Cross.