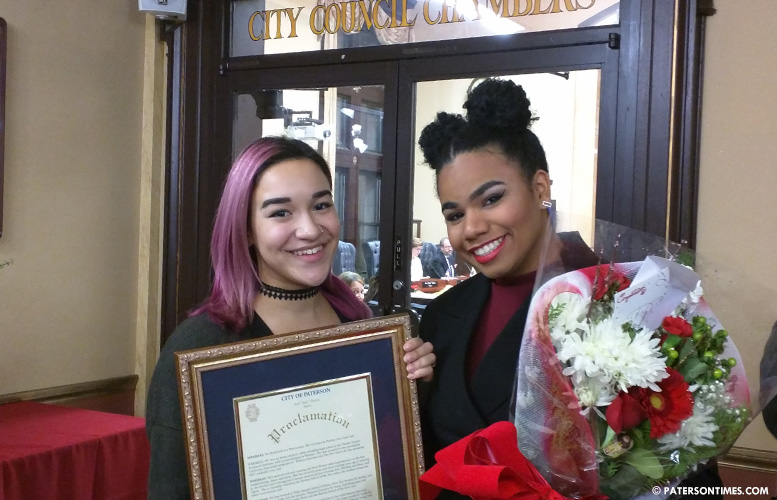 The girl who had the entire city cheering for her as she advanced to become a finalist on the “Voice” was honored with separate citations from the mayor and the council on Tuesday night.

Her best friend from high school, mayor Jose “Joey” Torres’ daughter Joely Torres (pictured, left), read out a list of her achievements so far in life and handed Wé McDonald a framed proclamation on behalf of the mayor.

“Thank you for all the love and support. I really wouldn’t have gotten through those weeks and days and hours without it,” said a wonderstruck McDonald, 17 (pictured, right). She sang “Hallelujah” in her trademark voice that made her a finalist to sustained applause and loud cheers inside the city council chambers.

Even before she got on the “Voice” she was enrolled at the Harlem School of Arts through which she performed at renowned venues like Carnegie Hall, the Lincoln Center, and the Apollo Theater. She won twice and was placed second twice at the amateur night at the Apollo. McDonald became the youngest person to be placed in the adult category at the Apollo in Harlem.

McDonald, who finished third on season 11 of the “Voice,” has collected millions of fans. The talented young performer from Paterson is destined for a great musical future.

“Paterson is proud of you!” remarked councilman Andre Sayegh. He urged her to fight against bullying. “One of the compelling aspect of your story is you were picked on. To all the bullies out there, look at her now,” he said.

The mayor said McDonald will be putting on a concert at the Shea Center for Performing Arts in January. He said city students will be invited to attend the winter concert expected to take place in the second week of January.

McDonald’s rise is viewed as an inspiration to other young people in the Silk City. Her rendition of “Hallelujah” was preceded by performances from the Rosa Parks High School chorus at the direction of choir director John Chapman. The talented local high school students’ performance included several holiday themed songs including “Silent Night.”