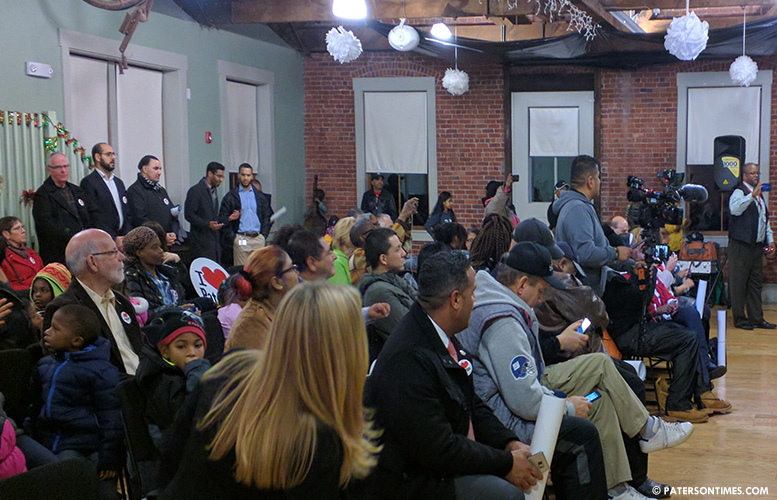 More than a hundred people rallied on Friday evening to bring the New Jersey Hall of Fame to Paterson.

City resident Corey Michael attended the rally inside the historic Rogers Locomotive Works Building on Spruce Street. He supports bringing the New Jersey Hall of Fame to the Silk City arguing it will attract visitors from throughout New Jersey to Paterson turning it into a major tourist attraction in the region.

“It’s a good idea. It will bring a lot of visitors,” said Michael, who has been living in Paterson for 20 years. “It’s another stop.”

“We believe the Great Falls alone is not enough for Paterson,” said councilman Andre Sayegh, a proponent of the plan to bring the museums to the city. The picturesque Great Falls is enough to bring visitors to America’s first planned industrial city, but not enough to keep them for a little while to explore the city’s other great features like the many historic landmarks and the countless number of ethnic restaurants.

“We need to enhance the appeal; we need to elevate the stature of our city; we need to monetize the falls; and that’s why we need to bring the Halls to the Falls,” he said.

The Halls for the Falls project has the support of mayor Jose “Joey” Torres. The mayor late last year expressed his support for the project outside of School 25 to Michael Symonds, the man behind the Halls for the Falls project. The mayor plans to provide some space for the New Jersey Hall of Fame inside a renovated Hinchliffe Stadium, said Gianfranco Archimede, director of the Paterson Historic Preservation Commission.

Archimede said the space will be inside a renovated two-story field house at the historic Hinchliffe Stadium, one of the last remaining sites where the legendary Negro League held games. Torres has made renovating the stadium a major priority in his administration.

The neighboring towns are also rooting for the city’s success in turning the Great Falls area into a major destination.

Randy George, the longtime mayor of North Haledon, thought bringing the New Jersey Hall of Fame, which does not have a permanent home at present, to Paterson will create opportunities for neighboring towns like North Haledon.

George said visitors coming to Paterson from the north will have to go through his town which will likely boost business for local shops.

“It’s a good idea,” said George. Asked whether it will bring visitors from throughout the state, he remarked: “I don’t see how it can’t.”

“We have record number of people coming to the Great Falls. People aren’t staying,” said Akhter. The common refrain is visitors drive to Overlook Park, snap a few image of the water fall and the Alexander Hamilton statue, and drive out of the area. “We need to create other venues of amusement, entertainment, and education in that area,” he said. “It’s something that makes a lot of sense. It’s a perfect fit.”

Before the new venues can be created a feasibility study has to be done, said Symonds. He said the study is estimated to cost $50,000 — so far a committee for the project has raised $8,000 to $10,000. The cost to conduct the study is minuscule compared to the potential benefits for the city, he said.