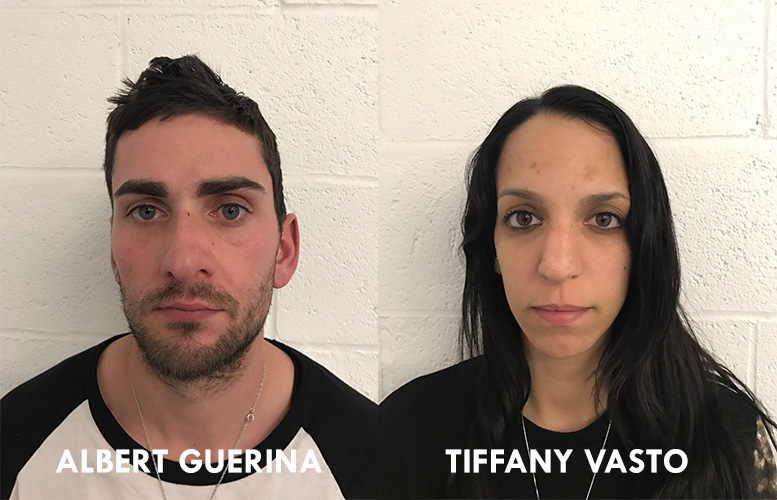 A man and woman allegedly trying to shoot heroin inside an idling car at a parking lot on Broadway and Straight Street tried to strike detectives on Monday night, according to Passaic County Sheriff Richard Berdnik.

Albert Guerina, 28, of North Arlington, and Tiffany Vasto, 26, of Lyndhurst, were allegedly inside the vehicle opening a glassine of heroin and preparing to syringe inject at around 8 p.m., detectives observed.

The detective leapt in the air and landed on the rear of the vehicle, Berdnik said. Vasto put the car in drive again and almost struck the detectives again before slamming the breaks. At that point, one of the detectives broke the driver side window of the vehicle and removed the key from ignition.

Vasto and Guerina were taken out of the car and placed under arrest. Vast was charged with aggravated assault, possession of a weapon, vehicle, for unlawful purpose, resisting arrest by force, and two drug possession.

Guerina was charged with two drug offenses, obstruction of governmental function. Authorities found he had two outstanding warrants from Medford and Pennsauken. Guerina had a $2,000 warrant out of Medford for drug possession and a $2,500 warrant out of Pennsauken for drunk driving.

Vasto and Guerina were processed and taken to Passaic County Jail.

One detective injured his hand while breaching the vehicle’s window and was taken to St. Joseph’s Regional Medical Center for treatment.

“I want to commend the detectives involved in this arrest. The two suspects not only broke narcotic and weapon laws, they attempted to flee police and resisted arrest. Luckily, no Sheriff’s Officer was seriously injured during this arrest,” Berdnik said.