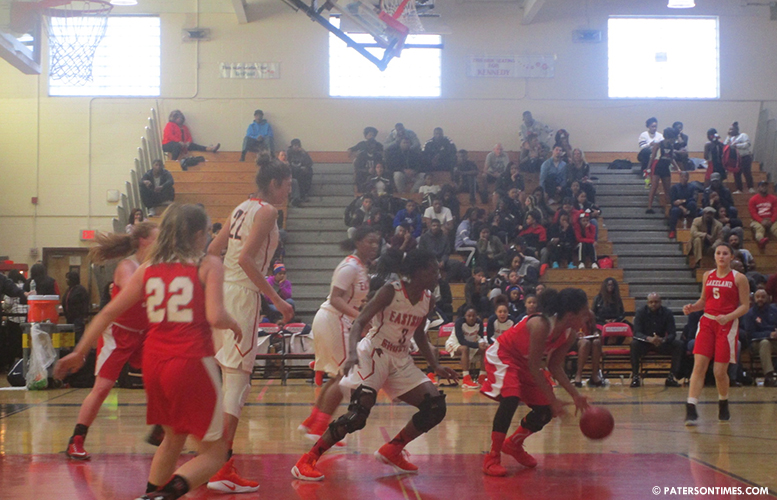 In what could parallel with any of the greatest clutch shots in basketball history, a trio of free throws left fans from both Paterson Eastside and Lakeland High Schools absolutely stunned at Saturday afternoon’s Passaic County Girls’ Basketball Tournament Semifinal.

In the hotly contested skirmish, held at John F. Kennedy High School in Paterson, a scant 10 ticks remained on the fourth quarter game clock. With ball possession at half court, the Lady Landers found themselves in a seemingly hopeless situation, on the wrong end of a 33-31 score. The inbounds pass from senior guard Jess Catalioto found Lakeland forward Sarah Deighan between half court and the free throw line.

The starting forward frantically dribbled left, closely shadowed by an Eastside defender. A desperation prayer fell well short.  However, the official’s whistle sounded, signifying a foul in the act of shooting. What added intrigue to suspense was that the offering came from beyond the three-point arc, thus granting Deighan three free throws.

The junior forward calmly strode to the charity stripe with a confidence that would surpass even Tom Brady and the New England Patriots.  A hush fell over the packed gymnasium with every eye glued on the unfolding scenario.

The first free throw — nothing but net.  The second free throw — swish.  With the score now tied at 33 apiece, the third shot went airborne. In what seemed like an eternity, the effort finally descended. The result was the same — the successful tickling of twine. Deighan made all three shots.

With Lakeland now clinging to a perilous 1-point lead and 5 seconds left in the contest, a desperate Paterson effort fell short, providing Lakeland with the narrowest of victories.  The Lakeland bench erupted in jubilant reaction to the remarkable conclusion.

Eastside, under the direction of Head Coach Ray Lyde, played valiantly from buzzer to buzzer. Eastside captured the opening tip and made an immediate statement with a three-pointer by junior Jabbarria Brown. Deighan responded for the Lancers with an easy put back off the glass.

The Lancers played the entire game by posting a 1-3-1 zone.  Eastside chose to employ a woman to woman defense.

A fascinating duel at the low post materialized early in the contest.  Eastside’s 6’9” sophomore center, Andrea Aquino, and Lakeland’s pivot, also a sophomore, Allison McBride, jostled under the boards all night long. Aquino was fouled several times early in the contest while in the act of shooting and iced each free throw.  McBride utilized quickness and was able to sneak underneath for several key baskets.

Fouls and turnovers marked first quarter action.  However, Eastside warmed up in the second frame, again led by the shooting of Brown.   Her second three-pointer of the first half was in tandem with immediate spark provided by Tatyana Ahmeade’s entrance into the contest.  The Ghost sophomore forward redefined the word hustle, grabbing rebounds, diving after loose balls, and more. In addition, several blocked shots by Aquino kept the Lakeland offense at bay.

With a little over 6 minutes to play in the first half, McBride skied for a rebound under the Eastside basket, but at an awkward angle. The Lancer center slammed to the floor with an alarming thud that reverberated through the entire gymnasium. Fortunately, silence morphed into warm applause as thankful fans expressed appreciation when McBride not only courageously got back to her feet, but was also able to stay in the game.

A palming call on Lakeland was followed by a 2-pointer from Eastside’s Ashmeade. Lancer senior, Courtney Ross, answered with a 20-foot banker from the left wing. Shortly thereafter, Aquino misfired from 15 feet but atoned with another shot rejection. An errant Ghost jumper found respite in the hand of Brown who was fouled in the act and converted both freebies.

Second half action concluded with a 3-pointer from the top of the key by Aquino. Eastside made the best of final possession with a 20-foot successful banker by junior Gift Sampson from the left wing.

Second half action was marked by Lakeland’s slow, but sure, chipping away at Eastside’s 11-point lead. Immediately following the opening inbounds pass, a Lancer bucket was followed by a 3-pointer from Lakeland sophomore Haunsay Fowler at the right of the key.

The two squads traded an air ball and a turnover, prompting Eastside’s Coach Lyde to call time out. The game-long Lakeland hustle was then illustrated.  Although no score was garnered, the Lancers captured no less than 4 consecutive offensive rebounds in one possession.

With the Ghosts lead cut to 4 points, 22-18, and 4:44 left in the third frame, a controversial charging call gave the Lancers the ball. A Lakeland offensive surge was balanced as Aquino started to warm up by hitting several short jumpers and scoring from underneath. The frame concluded with a 20-footer by Eastside’s Brown and in a foretaste of what was to come, a free throw by Lakeland’s Deighan.

The final frame was inaugurated with a furious scramble, resulting in a jump ball — possession Lakeland.  In a textbook 2 on 1 fast break, Brown found Shani Gerald for a fast break lay-up.  After being fouled while shooting, the freshman guard converted 1 of 2 at the line.

Lakeland, following a defensive rebound by Deighan, converted on a Fowler to freshman Kerra Mark to McBride exchange, for an inside two-pointer. With 4:24 left on the game clock, the Ghost lead had shrunk to 30-27.  However, the sticky Eastside defense was unrelenting, resulting in Lakeland Head Coach Erin Zarubnicky calling a time-out.

The strategy worked as McBride hit off the glass from the low post. In addition, fruit of another rebound, via the hustle of Eastside’s Ashmeade, was squandered as two Ghost free throws failed to find their mark.

The last minute and a half was marked by articulate strategy from both coaching staffs and a parade of time outs. The stage was set for the incredible, astonishing scenario that saw the Lancers win with a 34-33 score.