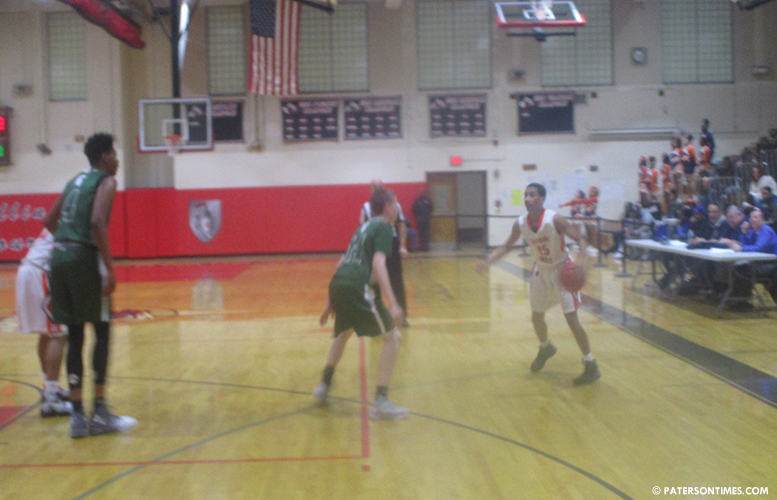 In what could be called a tale of two cities, the Eastside High School varsity boys’ basketball squad combined a team effort with a pair of brilliant individual performances to knock DePaul out of contention in the Passaic County Boys’ Basketball Tournament Semifinal.

Played on the court of Paterson’s John F. Kennedy High School, the DePaul youth movement started several freshmen with nary a senior on the entire squad. Talented as the Spartans proved to be, the experience and athleticism of Eastside eventually prevailed.

With both squads employing a man-to-man defense, Eastside enjoyed a 34-26 halftime lead due, in part, to the spectacular play of senior forward Junior Santiago.  During one stretch in the second quarter, Ghost teammates cleared the lane on offense enabling Santiago to go one-on-one from the top of the key against his defender.  A dizzying array of amazing moves, lay-ups, and scores resulted.

Toward the end of the game, with the victory still in the balance, Ghost Coach Shaniqua Bacote, assisted by Nyack College Basketball Hall of Famer, Roger Sangster, called on guard Al-Jumu Johnson to hold court. The electrifying senior frustrated the Spartan defense by pin-balling to the hoop, time and time again. DePaul had no answer other than to allow a certain score or to foul.  As a result, Johnson almost camped out at the free throw line.

With the above being said, and to put it mildly, Santiago and Johnson had plenty of help from their friends.

Senior Azziz Watkins hit a short runner to inaugurate Eastside’s game scoring. Soon thereafter, Ghost sophomore Matthew Lee drove the lane, was hammered in the act, but recovered to drop in both free throws. Santiago underscored the Eastside offensive thrust with a graceful cross over lay-up/hook.

DePaul’s big man, Elijah Hutchins Everett, only a freshman, awakened the Spartan offense by scoring from inside the paint. However, Eastside’s Johnson pick-pocketed a DePaul guard, charged up court, and dished to the right wing for a Ghost 20-footer. Watkins followed by finding Santiago for an easy two off the glass. With 1:06 left in the first quarter, Eastside enjoyed a 17-8 lead.

Watkins immediately cashed in on a coast-to-coast, wheeling and dealing, lane score. DePaul sophomore Skylar Wicks soon found trouble in the Eastside paint but managed to kick out to sophomore Eddie Davis on the perimeter who calmly sank a 20-foot jumper. Eastside’s Johnson (Lamar) then turned in a neat 10-foot stop and pop. With 6:54 left in the first half, miscommunication led to an Eastside turnover.  Johnson (Al-Jumu) then initiated his one-on-one clinic with a rocker step and lightning quick drive from the left wing.

DePaul turned to Davis again who jetted through the lane and at the last moment, dished to freshman John O’Reilly waiting in the wings for a cool-as-a-cucumber 25-foot rainbow.  Following a three-pointer and two free throws, the Spartans suddenly found themselves back in the game, trailing only 25-23.  However, it was then the Ghosts handed the ball to Al-Jumu to again run the lead up before halftime.

The beginning of the third frame saw Eastside freshman Lee Turner find Santiago twice with assists for successful baskets. Ramos, Mr. Hustle, captured one of his many rebounds by cleaning house after a fast-break, missed Eastside lay-up.

Hutchins-Everett continued to toil on the boards for DePaul with an easy put back of a Spartan misfire. Soon to follow, with the Spartan defense spread out, Eastside countered with Johnson (Lamar) schooling his defender from the top of the key for a spectacular, twisting, turning lay-up. A Ghost travelling violation concluded the third quarter with the score: Eastside 46-DePaul 39.

With the lead shaved to 5 points, Eastside’s Johnson (Al-Jumu) stepped into the nearest phone booth and changed from Clark Kent into Superman. All Spartan traffic attempting to cross the George Washington Bridge was halted.

DePaul’s Hutchins-Everett hit a 10-foot jumper but it was too little, too late.  The final tick of the game clock saw Eastside reign as victors, 61-57.