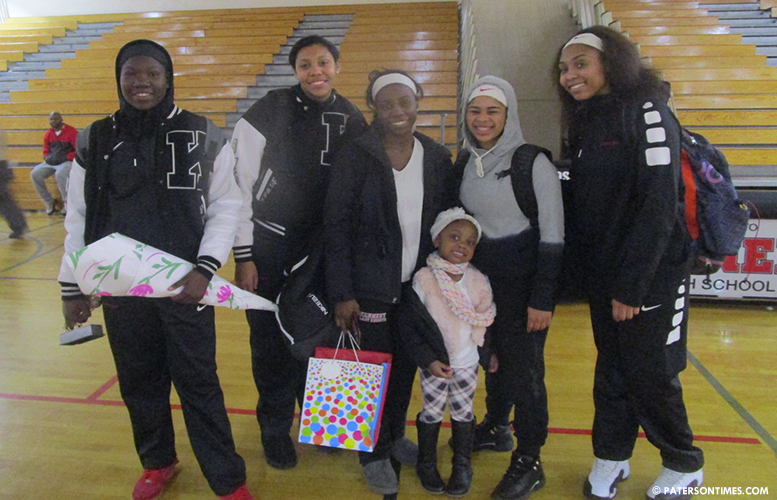 The impending graduates were presented with beautiful bouquets of flowers at moving mid-court ceremony prior to the game’s start.  The fantastic five of Latice Cunningham, Cha’liya Brown, Tajae Stevenson*, O’lesheya Braxton, and Jayla McDuffie played the final home game of their sterling careers.

The above asterisk (*) after Tajae Stevenson’s name was no mistake.  The 18-year old was a pre-season favorite for North Jersey Player of the Year award (if not New Jersey player of the year.)  After starting for JFK Head Coach MarQuette Burgess for a trio of seasons, an injury prevented Tajae from garnering any game time this year.

“It’s been tough playing for three years and having to sit the bench,” Tajae said after her teammates defeated the Paladins.  “I tore the ACL (anterior cruciate ligament) in my left knee this summer playing AAU ball in Georgia.  I had to come home and have surgery at St. Joseph’s Hospital.”

Almost seven months have passed since the devastating setback.  However, the Temple University bound senior still managed a smile when asked about her high school career and future.  Due to hard work, patience, and the support of her teammates, Tajae said her physical rehabilitation is complete and that she is now able to run and exercise.

“I’m so happy to be able to continue playing in college,” Tajae continued, who was granted a full athletic scholarship.  “The coaches at Temple have kept in contact with me.  I promised them that I would attack rehabilitation at full speed.”

Tajae will join recent Kennedy graduate Ebonee Jackson at Temple.  Ebonee starred in track and field for the Knights and now runs collegiately for the Owls.

Chaliya Brown basked in the glory of victory by hugging her little sister, Lailia Adams.  With a twinkle in her eye, the 4-year old whispered, “I want to play basketball just like Chaliya.”

Chaliya described her round ball high school teammates and coaches as, “a family.”

“Jayla, Latice, O’lesheya, Tajae, and I have all played together since we were five years old,” 18-year old Chaliya said.  “I will really miss all of my coaches, as well.  I have played varsity since my freshman year.  Coach Burgess, Coach Walker, Coach Redmond, Coach Pierce, and Coach Johnson have all been great.”

Chaliya said her on the court relationship with her four senior teammates was “like chemistry.”

An inquiry as to the career choice of the soon to graduate senior was met with the enthusiastic response, “an Air Force fighter pilot.”

Concerning transition from basketball basics to basic training, Chaliya said she will meet with a recruiter later this month.

I knew I wanted to do something connected with the military since I was young,” Chaliya stated.  “When I first told my father what I wanted to do, he was concerned.  But now he is fully supportive because he knows that’s what I really want to do.  I am really going to mix my friends but we will keep in touch by group text chatting.”

Concerning the victory over P.C., point guard Latice Cunnigham said that the one-point halftime deficit was addressed in the halftime locker room.  The Paladins had added to their momentum by sinking a long bomb three-pointer at the buzzer.

“Coach Burgess told us to play as if the score were 0-0, so we did just that,” Latice said.

Concerning the upcoming challenge on Saturday against Lakeland for the county championship, held at Wayne Valley, Latice stated, “I think we can win if we play together.”

“I think we’ll do well this year and hopefully win,” the 17-year old said.  Also hoping to play at the college level, Jayla has received partial scholarship offers from Millersville University, in Pennsylvania, and South Connecticut State University.

Jayla’s proud parents were on hand to see her final home game.  She did not disappoint, scoring 16 points, grabbing 10 rebounds, and rejecting 5 shots.

“I’m overwhelmed about my oldest daughter,” Pam McDuffie said.  “I’ve seen her develop so much in her abilities over the years.”

Athletic talent runs in the McDuffie family.  Paterson Eastside graduate Jay McDuffie, Jayla’s father, is a member of the Ramapo College Basketball Hall of Fame.  Her uncle, Paterson’s Rev. Michael D. McDuffie, inexplicably bypassed what many say would have been a Hall of Fame basketball career and played only football in high school.

“I see a lot of me in her,” McDuffie said of Jayla. “She is a team player, she crashes the boards and is a great teammate.”

Meanwhile, back at the hardwood ranch, the Lady Knights quickly erased their halftime deficit and slowly built an insurmountable second half lead.  Key to victory were the lightning quick guard tandem of freshman Ayanah Young and sophomore Taylor Yancey.  The dribbling skills and defensive prowess of the dynamic duo kept the Paladins off balance.  Coach Burgess employed a 1-3-1 zone that neutralized penetration into the Knight lane.

Paramus Catholic rallied to within five points of Kennedy’s lead in the waning moments of the contest. However, led by the ball control of Yong and Yancey, the Paladins were forced to foul, leading to a Knight parade to the free throw line and the eventual 49-42 victory.  Equaling McDuffie’s 16 tallies was Cunningham, also with 16 scores.  The latter also added four steals.  Cha’liya Brown capped Kennedy scorers in double digits with 10 points.