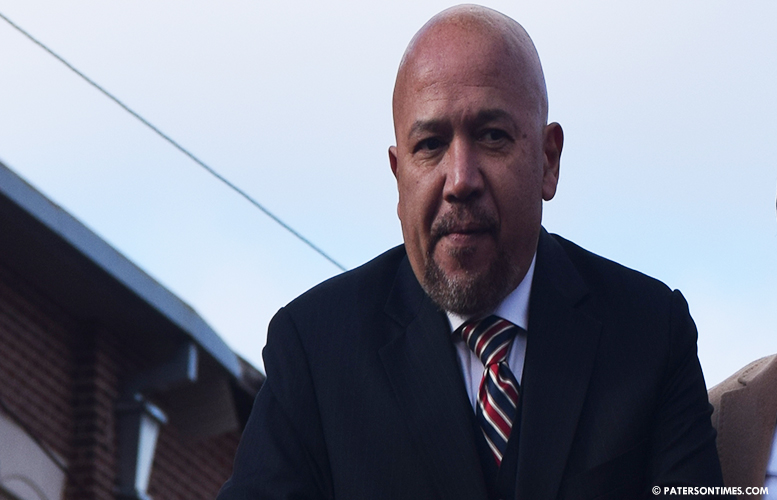 With less than a year to go before he will be campaigning for re-election, mayor Jose “Joey” Torres on Wednesday night shared his ‘forward Paterson’ economic plan with council members in a three-and-half-hour long presentation.

Torres’ presentation came after much criticism from councilman Andre Sayegh who repeatedly said the mayor neither had a plan nor a vision for the Silk City. Sayegh was not in the council chambers for the presentation.

Sayegh said he had a previously scheduled public safety meeting with his constituents which kept him away from City Hall. “My constituents come first,” he said. “I was calling for this plan over two years ago. Quite frankly, his economic plan is two years too late.”

Torres should have unveiled an economic plan in the early days of his waning administration, said Sayegh. “We know that economic growth is a top priority. Instead he chose a road resurfacing plan that will cost taxpayers money. You got to find money before you spend it.”

Torres is spending almost $37 million to resurface all of the city’s primary roads. Torres sees the massive resurfacing project as a much needed infrastructure project that over time will assist in growing the local economy.

Economic development director Ruben Gomez said over the past 30 months zoning and planning boards have approved 150 projects. He said there is $297.45 million in new proposed developments in the city.

Gomez said 60-percent of those projects have been completed. He also highlighted the expansion of business in the Silk City through New Jersey Economic Development Authority (EDA) tax breaks.

Governor Chris Christie’s administration has approved big tax breaks to retain businesses like Accurate Box, Coronet, and Master Metal Polishing in the city. Accurate Box received a $40 million tax break in 2014 to expand its facility in the Bunker Hill section. This tax break helped to keep 224 jobs in Paterson and the firm promised to create 51 more jobs, according to the state.

The state gave a $29.4 million tax break to Vitaquest, a big supplement maker, to move to Paterson. Just last week, the state awarded $21 million in tax breaks to two more companies in the city.

Gomez also mentioned companies like Nouri’s Bakery and Giannella’s Bakery that have expanded their footprint. He said the South Paterson business incubator and commercial kitchen is expected to open this summer which will allow local food entrepreneurs to start small businesses.

There are also large projects being eyed by the Paterson Parking Authority. Tony Perez, director of the authority, has five projects that will cost $303 million to build. A Center City expansion project in the downtown, a Ward Street transit project at the site of the current parking deck (Torres wants what he is calling a “Super Block” at the location), a parking deck project close to the Great Falls, and a commercial and residential complex on Madison Avenue close to a proposed light rail station.

Perez’s had visual designs that impressed council members. His agency has had visual designs for the Paterson Armory and Alfano Island for years. Neither of the two went anywhere. He expressed confidence in the five projects moving ahead, but noted that depends on whether the city can recover the $105 million tax break it lost after the hotel project collapsed.

Perez said the authority has on hand $30 million in tax credits for the projects. He is hoping to leverage every public dollar for three private dollars. He will have to wait for the restoration of passenger rail on the freight line that will connect Bergen, Passaic, and Hudson Counties before the Madison Avenue development can occur.

Council members had praise for the presentation that ran for 3 hours and 35 minutes. Michael Jackson, 1st Ward councilman, said the presentation painted a “positive outlook” for the city. “We’re moving in a beautiful direction,” he said.

“At least this is a plan in place,” added Maritza Davila, councilwoman at-large. She described the presentation as “ambitious.”

Kenneth Morris, councilman at-large, also called it “ambitious” and “exciting.” He asked how the city plans to support the infrastructure to accommodate flow of people and vehicles into and out of the city.

“We really need to look at corridor planning,” said Morris citing traffic jams. Torres said his administration will have a mobility and transportation plan at a future date.

Torres also mentioned his plan to open a new entrance to the Great Falls National Park from West Broadway and rehabilitation of Hinchliffe Stadium. He said the city is close to awarding contracts to fix the exterior of the historic stadium.

Davila asked when the economic development plan will be fully implemented. The 150 applications approved by zoning and planning boards will be completed in a year or so, said Torres.

“I’m looking forward to my re-election so I can continue to be part of this great re-development effort,” remarked Davila. Torres’ plan called “Forward Paterson 2017″ is same as “Onward Paterson 2014,” his campaign slogan from three years ago.

Though he may have sold his presentation to the council, Torres will have a tougher time selling voters on a fourth term. His administration has been dogged by scandals since he returned for a third term. The New Jersey Attorney General’s Office is investigating him for using public works employees – who billed the city overtime – for private projects. His office has been searched by the FBI in connection with the renovation of a Montgomery Street church for a reentry program using federal grant money.

“Does it take an [upcoming] election and three criminal investigations to motivate the mayor?” remarked Sayegh.