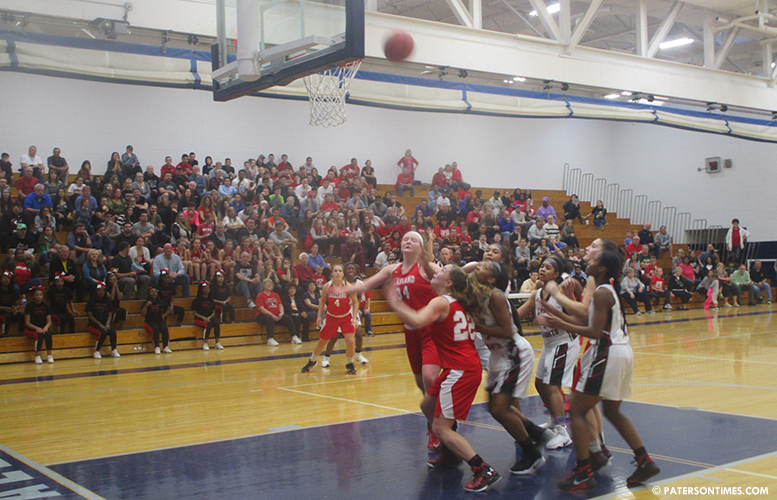 Kennedy’s point guard Latice Cunnigham turned in the performance of a lifetime. The electrifying senior led the Lady Knights to a pulsating 36-26 victory over Lakeland Regional in the Passaic County Girls’ Basketball championship. If the iconic board game Monopoly were used as an illustration, Cunningham would not pass GO, she would not collect $200, she would go straight to the WNBA.

Cunnigham had plenty of support from her teammates.  In addition, the game was much closer than the final score indicates. Played at Wayne Hills High School, JFK Head Coach MarQuette Burgess chose to start the familiar five of seniors Cha’liya Brown, Jayla McDuffie, Cunningham, and two sophomores, Taylor Yancey and Taniesha Gilbert. The Lancers employed a 1-3-1 zone for the contest while Kennedy sported a woman to woman defense.

Fittingly, Cunningham inaugurated the Knights’ scoring with a 15-foot jumper. A series of fast pace action trips up and down the court by both squads failed to produce. Cunningham then turned in the shot of the evening by driving into the lane and somehow, miraculously, avoiding contact. The momentum culminated with a combination hook-curl shot to the right of the low post at full speed while simultaneously falling down. In what was to be a microcosm of her entire selfless floor game, Brown found McDuffie in the lane who iced a lay-up through heavy traffic.

At the end of the first frame, the Lady Knights enjoyed a 10-4 advantage.

Lakeland countered offensively in the second quarter with a nice one dribble step-back and 20-foot jumper by senior guard-forward Michelle Froehlich. Cunnigham then grabbed her own missed shot in the land of the giants and scored from underneath. Another spectacular drive by Cunnigham, this time from the top of the key, hit pay dirt.

Consistent full court pressure by Kennedy kept the Lancers off kilt for much of the first half.  The Lancer offensive drought was finally ended when junior guard Skylar Catalioto fired to sophomore center Allison McBride, under the glass, for a banker. Crowd favorite, freshman guard Ayanah Young, then entered the contest for Kennedy.

Lakeland junior forward, Sarah Dieghan, who hit three straight free throws with time running out to cement the Lancer’s semifinal win over Eastside, then dominated in the lane by grabbing two caroms and scoring. Several wild exchanges by both squads followed, spiced with turnovers. Lakeland freshman guard, Keira Marks, broke the confusion with a coast-to-coast, fast break lay-up. A palming call was whistled against the Lancers with 30 ticks left on the first half clock.  McDuffie concluded all scoring with a successful put-back of her own missed inside shot attempt.

The Kennedy lead stood at 16-11 as the buzzer sounded.

Whatever Lakeland head coach Erin Zarubnicky told his players at halftime certainly worked.  The Lancers opened up the third quarter like a house on fire. Two quick Lakeland scores were followed by a nothing-but-net 20-footer by Lancer sophomore guard Hausnaya Fowler.  Kennedy coach Burgess called a timeout to calm his troops but the strategy only resulted in an immediate turnover. With McDuffie and Lakeland sophomore Danielle Pasquariello fiercely jostling under the boards, another Lancer shot attempt hit home. With crowd volume turned up to the max, Lakeland was ahead for the first time in the contest.

The two squads then played see-saw with the lead as competition grew fiercer. Cunningham hit a nifty, stop and pop jumper but Fowler countered with a full court, fast break lay-in. A tumultuous exchange of steals, highlighted by bodies flying to the hardwood at half court, was finally quelled with Pasquariello hitting two free throws, courtesy of being fouled in the act. A missed JFK corner bomb was followed by a forced jump ball by Brown. Cunningham then pickpocketed a Lancer dribbler and went full court for the lay-up, but was hammered. Two successful free throws saw Kennedy now gain a one-point lead.

Again led by Brown, the Lady Knights kept Lakeland off balance with a successful half-court trap. However, despite forcing a number of turnovers, no offensive fruit was gleaned. The Knight scoring drought was finally nipped by a McDuffie inside score. Cunningham followed by hitting one of two from the charity stripe.

Play was temporarily halted by a medical attention time-out called by the referees. Immediately following, with Kennedy applying full court pressure, the Lancers inbounded the ball from underneath their own basket. Cunningham intercepted the pass and calmly pulled up for a 20-foot rainbow. The shot served as only a brief hint of the nail-biting action that was to come during the dramatic final frame.

Lakeland guard, junior Sammy Jost, wowed the crowd with a behind the back dribble that left her Kennedy defender grasping for air. The Lancers then scored and gave notice that they had indeed been bent, but refused to break.

With 6:08 left in the game, yet another Cunningham steal was answered by a Pasquariello free throw.

The Knights now found themselves clinging to a perilous 2-point lead.

Paterson’s McDuffie then began a dominant stretch under the boards. Her offensive rebound was followed by hitting one of two free throws, despite the deafening roar of the capacity crowd.  Jayla then rejected a Lancer offering in Lakeland’s paint. 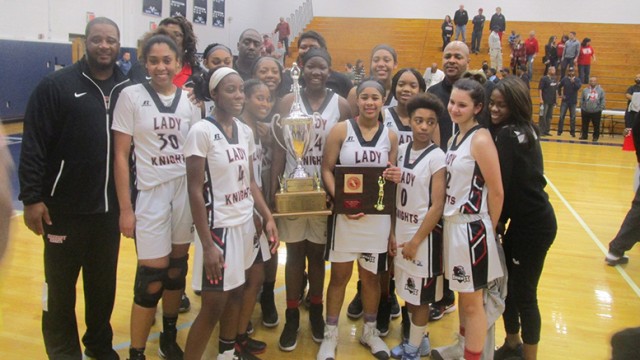 The Kennedy Lady Knights celebrate their victory over Lakeland Lancers.

The final minutes that led to Knight victory were highlighted by the incredible play of Cunningham and strict adherence to coach Burgess’s game plan. With a scant lead, Brown, Cunningham, and sophomore Taylor Yancey played keep away from Lakeland defenders. Adept dribbling and passing chiseled valuable game time from the clock. The Lancers were forced to foul. The desperation led to a Kennedy parade to the free throw line.

With 3 seconds left, Kennedy senior Tajae Stevenson trotted onto the court. Injured and unable to play the entire season, Knight fans responded by rising to their feet and granting the blue chipper a standing ovation. As the buzzer sounded, team members swarmed their role model at mid-court and soon hoisted the championship trophy high in the air.

“We knew Lakeland had no fear coming here today,” coach Burgess stated after the game.  “They defeated Eastside. At the start of the second half we were playing their game. They were forcing us to take jump shots. However, our defense picked up. We didn’t convert all the opportunities but we converted enough of them.”

Kennedy sophomore guard Yancey credited team work for the victory. Holding her most valuable player of the game trophy, Cunningham concurred with her teammate.

“This is a great accomplishment. All of our seniors get to be county champions. Now we are going to go out and work hard for a state title,” said Cunnigham.