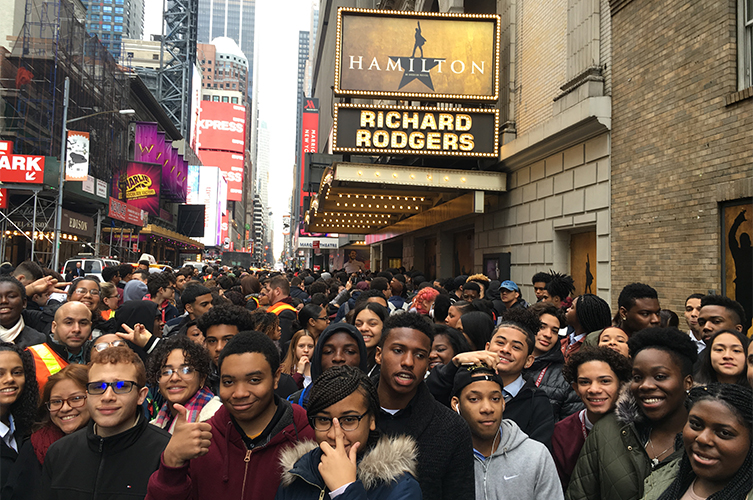 Sixty students from the Paterson Charter School for Science and Technology traveled to the Richard Rodgers Theater in New York earlier in the month to watch the acclaimed play “Hamilton.”

Before the boys and girls watched the play about the life of Alexander Hamilton, the founder of their hometown, they watched fellow students perform a short play about the Boston Massacre on the Broadway stage.

Students Jiedy Reyes and Naila Harrow performed at the stage of the Richard Rodgers Theater and participated in a question and answer session with the cast members of “Hamilton.” Reyes and Harrow performed a skit similar to “Hamilton,” but focused on the Boston Massacre, a pivotal event that turned colonial sentiment against the British Empire leading the way to American Independence.

Amada Leach, chair of the social studies department at the charter school, said both students worked hard and practiced for their short performance.

“I’m sure performing on such a big stage in front of so many people was a little intimidating for our students at first. But Jiedy and Maila worked hard on developing and practicing this performance and were well prepared — they executed it flawlessly,” Leach said.

Paterson Charter School for Science and Technology won a grant through the Gilder Lehrman Institute’s Hamilton Education Program which allowed 60 students to see the play for $10 each on February 8, 2017.

Gilder Lehrman Institute works in partnership with “Hamilton” and the Rockefeller Foundation to improve teaching and learning of American history.

“Focusing on Alexander Hamilton’s contributions to the establishment of our nation and by developing our performance piece about the Boston Massacre has allowed our students to gain a unique perspective and understanding of a critical period in American history,” Leach said.