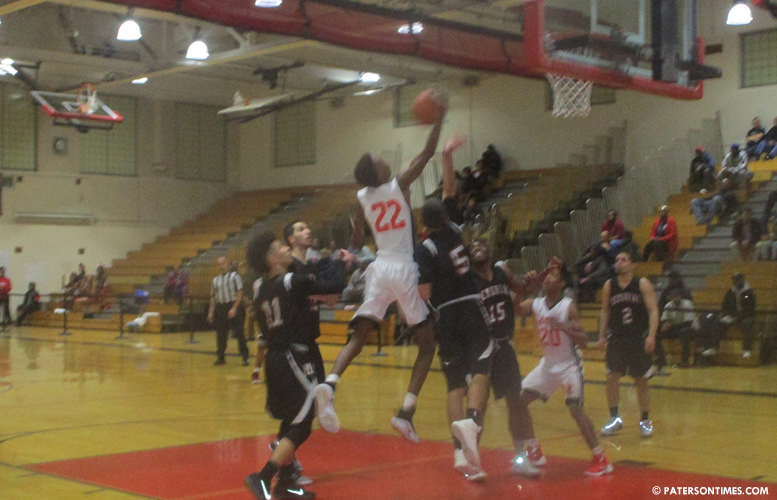 In an awesome display of speed and quickness, Paterson’s John F. Kennedy High School’s varsity boys’ basketball team raced to an 86-69 victory on Monday.  In a contest which featured sensational offensive moves, drives, shots, and even dunks, the Knights non-stop fast break machine proved too much for the valiant visitors, Memorial High School from West New York (New Jersey).

Kennedy erupted for an early 8-0 lead. Williams converted on a 3-point long bomb. Dean followed with the same. Hernandez snatched a defensive rebound and fired up-court to Williams who rattled the rafters with a monster slam dunk. Shaken by the tumult, Memorial head coach Steve Leon called a time out.

Kennedy kept heat on. However, Memorial’s Laz Lopez broke the Tiger scoring drought with a successful drive to the bucket. Williams then cleaned house under the boards for a Kennedy score.  Lopez followed with another basket, a through the lane running banker.  Almost single handedly, Lopez dismantled the JFK lead by then cashing in on a three-pointer from deep in the right corner.

With Memorial ahead by only one point, 12-11, Hernandez snatched a defensive rebound. Shouldors followed with a shake and bake drive from the right wing, hit a runner, and was fouled.  The ensuing successful free throw resulted in a 3-point play.   Dean, not to be outdone, landed on Park Place by cashing in on a spectacular deposit while falling down.  Hernandez snatched a JFK missed fast break attempt and hit pay dirt.  Brown concluded the scoring outburst by converting a nifty curl shot from the right side of the rim.

The Kennedy defensive blanket continued to frustrate the Tigers in transition.  Knight sophomore Joshuel White passed to junior Jaylen Colon on the perimeter.  Colon fired back resulting in a nothing-but-net White 3-pointer.

Center Jaylen Hargrove then entered the game for Kennedy.  The freshman made an immediate impact by scoring underneath and adding the foul shot for a 3-point play.  Colon converted a spectacular fast break score.  Knight freshman Jaltmali Willi Cargenie then pickpocket a Tiger dribbler and went coast to coast for two.  However, Memorial’s Martinez responded with the same.

Another inside bucket by Hargrove was answered by a runner in the lane from Tiger sophomore Jadon Cepeda.  Kennedy junior Jamir Lattimore then skyed for a rebound and hit one of two from the charity stripe.  Cargenie followed with a 3-point rainbow from the right wing that circled the rim for what seemed an eternity but finally dropped through the net.  Cargenie and Hargrove combined on a give-and-go resulting in two more points by the latter.  Memorial’s Junior Brahiam Melo answered by converting a 20-foot jumper.  A Tiger air ball concluded first half action.

The Kennedy running game reached full throttle in the second half.  Shouldors benefited with a 20-footer.  Soon thereafter, Brown’s athleticism was displayed with a jumping-jack rebound and score.  A full court drive by Dean culminated with an NBA-like pin-ball through defenders and successful lay-in.  Colon then cruised up court and kicked out to White who calmly sank a 3-pointer.

If any fans were distracted for some reason, Williams cured the momentary lack of focus with another tomahawk dunk.  The resounding slam resulted in a 67-39 Knight lead.

With 6:12 left in the contest and a comfortable 20-point lead, JFK Coach Patterson opted to play Cargenie, junior Zhamiar Canty, sophomores Avant’e Gilbert and Germir Robinson, and freshman Deishon.  The quintet did not disappoint.  Highlights included a tip-in by Cargenie, a Gilbert to Robinson full court pass for an easy cherry-pick layup, and several sensational offensive efforts by Deishon.

A 3-pointer and two foul shots by Memorial’s Cepeda proved to be too little too late for the Tigers. The final buzzer sounded with Kennedy victorious by 17 points.

“I think I played a good game but my teammates played better,” Colon said after the game. “This has been a good season.”

Lattimore and Colon said they have played together since they were 8-years old.

“This is great to win this year,” Lattimore said.  “Last year we lost in the first game in states to Morristown.  We are happy to win tonight.”

Seniors Hernandez and Dean concurred with their teammates.

“This has been a great year to be able to see the freshmen, sophomores, and juniors do well,” Hernandez stated.  “We hope to go as far as we can in the state tournament.”

“We were underdogs to start the year because of our lack of height,” Dean summarized.  “But it’s not the height that counts, it’s the heart.”