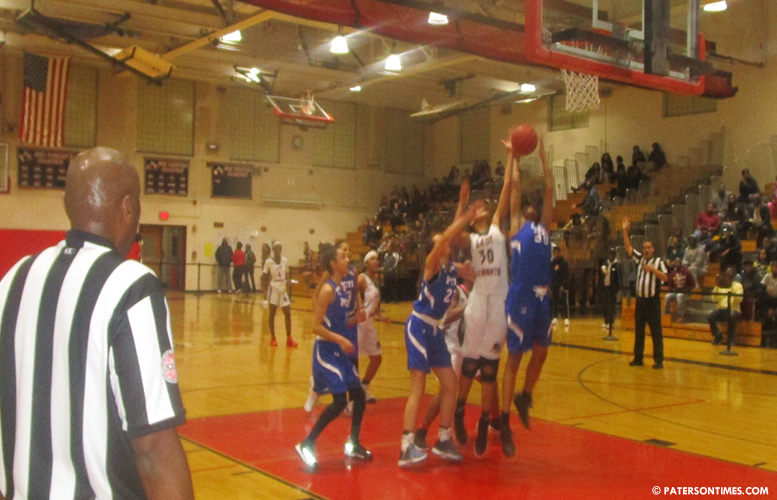 Held on their home court, the Lady Knights overcame a 12-point first half deficit to pull out a final 52-48 barnburner.

Following the opening tip, the visiting Bulldogs barked out to a 4-0 advantage. Kennedy’s first score was a turnaround, off the glass jumper from the low post by Jayla McDuffie. The senior center joined fellow seniors Cha’liya Brown and Latice Cunnigham for the initial jump ball.  Sophomores Taylor Yancey and Taniesha Gilbert rounded out JFK head coach MarQuette Burgess’ starting lineup.

McDuffie shook loose inside again for another score which was followed by a text book Knight two-on-one fast break marked by a last second pass by sophomore Danielle Pasquariello. Kennedy’s Brown lofted a 25-footer that virtually went in and then came out of the basket.  The resulting rebound favored the Bulldogs. The duel between paint pivot persons, McDuffie and PCTI center Dashanique Ruffin, was then showcased. This time Ruffin got the nod by drawing a foul and subsequently hitting 1 of 2 foul shots.

The Bulldog starting quintet of Ruffin, forward Jenna Abru, and guards Jasmine Morgan, Jenisis Aloverino, and Lindsay Fiorellini, then put on a virtual round ball clinic in roaring to a huge lead. Morgan swished a 15-foot jumper and soon thereafter rushed up court, zigged right and zagged left, for a pull-up 15-foot jumper. With 1:51 left in the first quarter, coach Burgess called a time-out to calm his troops.

The Kennedy defensive prowess then came into focus. A half-court trap interspersed with an occasion full court press nicely complimented their woman to woman forecourt strategy.  The relentless pressure resulted in numerous PCTI turnovers. However, Rome was not built in a day and huge basketball deficits are not easily overcome. The Knights had to scrap and claw for every point against the tenacious Bulldogs. A number of missed Kennedy free throws throughout the entire contest added even more angst for Knights fans.

In the minute prior to the first quarter buzzer, Morgan misfired from beyond the arc on the right wing but was fouled. In a scenario that would be replayed in the pressure packed final moments of the contest, Morgan was awarded three foul shots, converting on a pair. Morgan blocked a Cunnigham shot attempt in the lane to conclude the first frame.

Armed with a 15-6 lead, the Bulldogs opened second quarter scoring with a Morgan conversion. A missed 3-pointer by the Lady Knights was followed by a defensive standoff between Yancey and Morgan in Kennedy territory. Bulldog guard Jenesis Alverio then converted on a 25-foot long bomb. Kennedy’s Brown returned the favor with her own successful 3-point moonshot.  From the right wing, Cunningham found McDuffie in the paint who dribbled once, shot, and was fouled, subsequently cashing in on 1 of 2 freebies.

As the second quarter reached the half-way mark, the Lady Knights still faced a 10-point deficit.  In what may have been the turning point of the contest, freshman JFK guard Ayanah Young, entered the contest. If diminutive and power can be used in the same sentence, this is certainly the case.

“It feels good to play varsity as a freshman,” Young said after the game. “I am short. I’m only 4 foot 10 inches tall. However my height is actually an advantage. It allows me to get in between crowds of defenders to make a pass or take a shot.”

Meanwhile, back at the hardwood, McDuffie missed an insider but grabbed the rebound for a 2-point put back. Soon thereafter, Cunningham, courtesy of an outlet pass, cruised up-court for a fast break layup, was followed, and converted the free throw culminating a three-point play.  Cunningham then pulled up for a 15-foot jumper. With Brown directing the offense from the point guard position, McDuffie grabbed another offensive carom. During the same sequence, Young found herself with the ball to the left of the key. An amazing 20-footer successful banker followed.

The stifling Kennedy defensive encumbrance continued, forcing a jump ball and a PCTI travelling violation. Young then rocketed from the top of the key into tall tree territory for a skillful lay-up. However, a wild scramble for the ball at mid-court was followed by a 20-foot successful rainbow by Tech’s Alverio.

With 20 seconds left in the first half and Tech lead cut to 27-21, Cunningham dribbled right off a pick set by Brown and dished to the right wing. The shot missed but spiraled directly into the hands of an unguarded, awaiting Young.  Ayanah calmly swished a nothing-but-net 15-footer as the buzzer sounded. In stunning reality, what had at once seemed to be a sure blowout had morphed into a real ballgame.

Second half was inaugurated with PCTI guard Linsday Fiorellini finding Ruffin in the paint for a hard hat score underneath. The play exemplified the excellent all-around game of the Bulldog forward-center. Ruffin’s shooting, running of the floor, rebounding, and hustle shined for the entire evening.

Gilbert then stole a cross-court Bulldog pass at midcourt and cruised all the way for a beautiful left-handed lay-up. However, Fiorellini responded for PCTI with a perfect 20-foot jumper.  Alverio’s inside pass caught the Kennedy defensive napping as Bulldog forward Jenna Abru converted an easy banker.

A flurry of defensive stops, steals, and stand-offs by the Knight defense resulted in a number of free throw line opportunities.  However, Morgan responded with two successful foul shots for the Bulldogs.

With 3:17 left in the third quarter and down by 34-30, Cunningham streaked up-court and fired to Gilbert waiting in the wings.  A successful 20-foot jumper resulted.  Tech’s Tiara Dixon responded by going coast-to-coast for a score. Tough defense by Bulldog Alverio then forced a Knight miscue.

In yet another dramatic play, Young intercepted an inbounds pass at midcourt and quickly scooted to the bucket, uninhibited, for a score.  The scoreboard now read 36-35. A Morgan successful offensive drive through the middle ran the PCTI lead to three points as the third frame concluded.

The fourth quarter surge by the Lady Knights, indeed, redefined the word “cardiac.” Gilbert led off with a steal. Brown canned a clutch 20-footer from the right wing.  With the momentum continuing to see-saw back and forth, and the Bulldogs clinging to a 4-point lead, PCTI head coach Mike Boorman opted for a time out.

Paterson’s Gilbert followed the brief break with a 10-foot runner. Kennedy was whistled for a foul which resulted in two successful free throw shots by PCTI’s Ruffin. The two squads exchanged turnovers. It was then that Knight coach Burgess turned to Latice “Money in the Bank” Cunnigham.

The Kennedy offense cleared out on successive occasions, allowing the senior speedster to duel one-on-one from the top of the key. Even prophecies by the Biblical patriarch Moses could not have been surer. Baskets and free throws were virtually automatic. Cunnigham’s dominance, which included a spectacular drive through the lane between two defenders for a score, was complimented by a pair of free throws by McDuffie.

With 1:11 on the clock and the roar of the capacity crowd reaching a deafening crescendo, PCTI held a one-point, 46-45 lead, and had possession. Abru was fouled and hit one of two from the charity stripe.

With Kennedy down by two and 54 seconds left, Cunningham fired to Gilbert who hit a clutch 15-foot jumper.  With 34 seconds left, the Knights experienced their first lead of the night, 48-47.  Gilbert then blocked a Bulldog shot attempt and soon thereafter cashed in on one of two free throws.

With a scant 10 ticks of the clock left and facing a deficit of 2 points, Tech rushed the ball up court. Alverino’s 3-point attempt from the deep right corner fell short. However, the PCTI guard was fouled while attempting the shot and was awarded three free throws. With every eye glued to the far end of the court, the first two offerings bounced tantalizingly off the rim. The third effort found successful net. The ensuing Knight inbounds pass, under the PCTI basket, went from Cunningham to Young to Brown. The latter was fouled with 6 seconds remaining in regulation. The confident senior hit nothing but net on both charity stripe attempts.

Gilbert and Young foiled the final Bulldog advance. Cunningham concluded the evening’s scoring with a free throw to cap off the exhilarating 52-48 Kennedy win.

“This was a good game for us. We fought through to the end. We didn’t give up,” said McDuffie after the game.

Senior O’leyshea Braxton concurred with her teammate. Braxton’s name will not appear in any box score because the Kennedy star guard-forward suffered a season ending injury a little under a month ago.

“I am really happy for our team,” O’leyshea said.  “I am supporting them all the way even though I can’t play.”