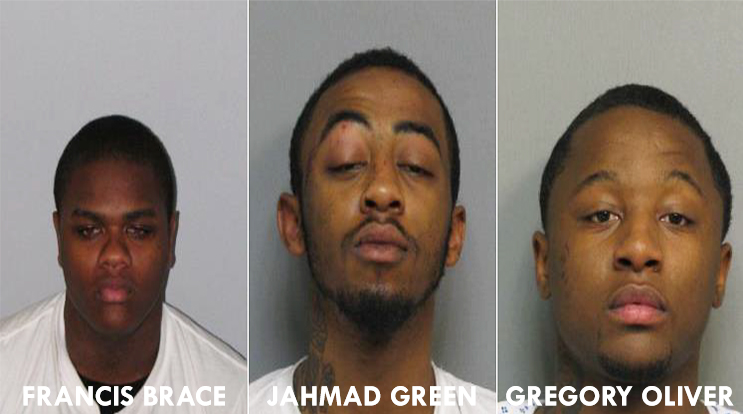 Three city men were found guilty of aggravated manslaughter on Tuesday for unintentionally striking two bystanders while firing at a car passing through the intersection of North 6th and Temple streets.

Brace, Green, and Oliver were originally indicted for murder and attempted murder for the August 31, 2014 shooting. The three men opened fire towards a gold Ford Taurus station-wagon passing through the intersection of North 6th and Temple streets at around 3:49 a.m.

Jaleek Burroughs, 27, was killed. Alaysia Chambers, 18 at the time, was wounded. Both were unintentionally struck in the head by the bullets intended for the vehicle, authorities said.

Brace and Oliver face 40 years in prison. They will have to serve 85-percent of their term before being eligible for parole.

Brace has a pending sentence on an unrelated fourth-degree weapons charge, authorities said.

Oliver has been indicted for the murder of 15-year-old basketball star Armoni Sexton.

Sentencing for the three men is scheduled for May 5, 2017. New Jersey Superior Court Judge Sohail Mohammed revoked their million dollar bails and remanded them to Passaic County jail pending sentencing after the guilty verdict.