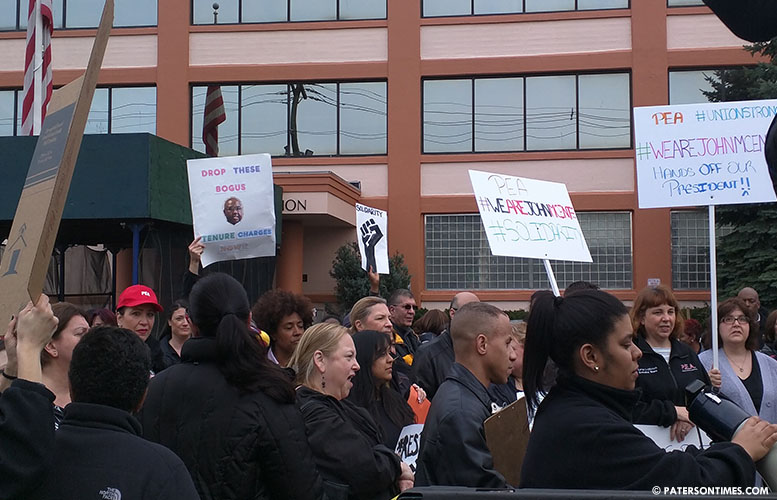 Protesters held up signs that read, “Hands off our president!” and “We are John McEntee,” and “Drop these bogus tenure charges now!” while chanting slogans targeting state-appointed district superintendent Donnie Evans.

“Donnie must go,” chanted the protesters calling for the ouster of the superintendent. McEntee, an outspoken union leader, has had a tense relationship with the superintendent over the past months over workers’ safety and classroom conditions.

“He was going into a school to represent a teacher,” said Ivette Hernandez, a math teacher at School 3, explaining the alleged incident that led to the tenure charges.

“They’re going to try to crack our union by getting McEntee fired,” said Brian Grilk, a physics and engineering teacher at John F. Kennedy High School. “These charges are bogus. It’s an act of intimidation.” He described his union president as a “thorn on Evans’ side.”

Members of the more than 3,000 strong Paterson Education Association weren’t the only ones showing support for McEntee outside of the headquarters of the Paterson board of education.

Andrew Policastro, 1st vice-president of the Bergen County Teachers Association, said, “He is a great leader; the charges are untrue. He was doing his job and doing it effectively.”

“I’m here to stand up for your union rights,” said state senator Raymond “Ray” Lesniak, a gubernatorial candidate. “Chris Christie is trying to break your union.”

Lesniak said McEntee is only guilty of defending his members and their rights.

“We got to make sure we protect him like he does us,” said Cassandra “Sandi” Lazzara, director of the Passaic County Board of Chosen Freeholders, a former public school teacher. Freeholders Bruce James and Assad Akhter also expressed their support for McEntee.

“Hands off John!” chanted more than 250 voices from the audience as McEntee prepared to address his members. He did not discuss the details of what transpired at School 4, but told the crowd, “Make no mistake. I fight for you. The officers fight for you. And everything we did was protected union activity. If given the choice to do it again, we’d do it over again just the same.”

School board members met in a closed session to discuss tenure charges against McEntee while more than a hundred teachers waited at the cafeteria. School board president told the teachers the meeting will likely be finished in 30 minutes or run longer.

The crowd grew impatient as the school board kept them waiting for more than an hour. The teachers chanted slogans to nudge the board to come out of its executive session.

“Today is McEntee, tomorrow is me!” chanted the teachers, now tired of waiting.

When the board ended its closed session, Mark Blunda, outside counsel for the Paterson Public Schools, said the board would not make any comments on the tenure charges. He cited a state statute.

McEntee said he was humbled by the outpouring of support he has received since the district filed tenure charges against him.