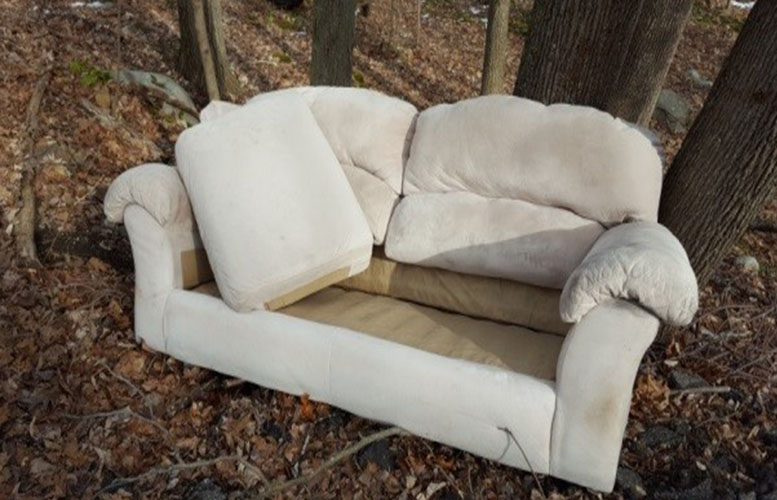 Fourteen people – including a city man — have been charged with dumping on public lands, according to the New Jersey Department of Environmental Protection (DEP).

Robert Cline, 53-year-old, of Paterson was captured on camera dumping a couch on the Waterloo Valley Road in Allamuchy Mountain State Park in Sussex County. He was swept up in a broader campaign to crackdown on illegal dumping on state lands called “Don’t Waste Our Open Space.”

State police over the past year investigated and filed charges against a wide variety of dumping cases including dumping of dry cleaning chemical filled drums, debris from a remodeling project, bags of household trash, a boat and trailer, car parts, and hazardous chemicals.

“Protecting our pristine lands and recreational properties from illegal dumping remains a major priority for the Christie Administration,” Bob Martin, commissioner of the New Jersey Department of Environmental Protection, said on Friday. “We will continue to commit resources to this program, prosecute violators to the fullest extent of the law, and educate the public about the consequences of illegal dumping.”

Authorities have been using technology to go after illegal dumpers. State police and conservation officers are helped by well-placed motion senor cameras in select state parks and wildlife management areas.

Other 13 people charged are as follows:

“The men and women of the State Park Police work each day to ensure the safety of visitors to our parks and preservation of the places that attract them there,” said Terri Genardi, State Park Police chief, said. “We welcome the additional eyes, ears and voices that our visitors provide to assist us in this important endeavor.”

More than 130 arrests have been made in illegal dumping cases since the start of the campaign three years ago.