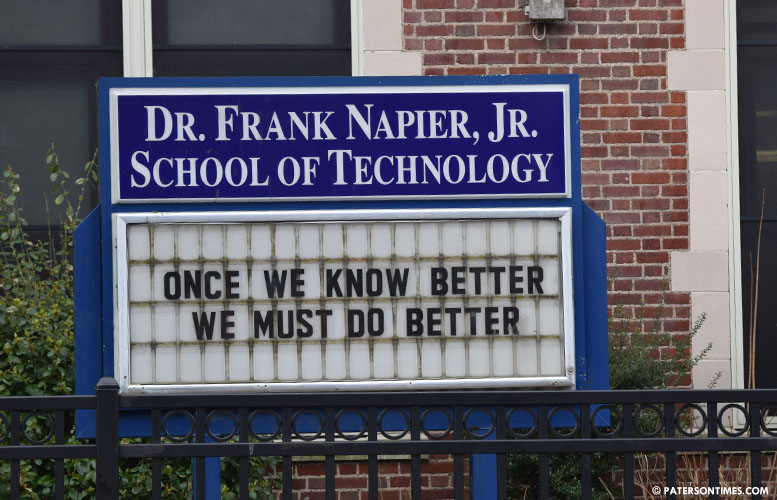 The Frank Napier Academy vice-principal who was involved in the alleged incident that led to tenure charges against teachers’ union president John McEntee left the district last week, according to school officials.

Davis accepted a job offer as principal of a school in Hoboken, confirmed Terry Corallo, spokeswoman for the Paterson Public Schools. She has been hired as a middle school principal at the Hoboken Public Schools, according to the superintendent’s office at the Hudson County school system.

Davis’ salary at the new job is $126,490, according to the Hoboken superintendent’s office. Her hiring was approved by the Board of Education there on March 16th, 2017. Prior to her move to Hoboken, she spent 11 years working at city schools. Her salary was $94,701 this school year, according to district payroll records.

A phone number was not available to reach Davis on Friday.

Her departure comes just days after the school board reviewed and certified tenure charges against McEntee for a December 2016 incident. The district alleges McEntee stormed into her office while she was meeting with a district staff member. He allegedly began “waving his finger and yelling loudly straight into the face of the vice principal,” according to a letter state-appointed district superintendent Donnie Evans sent to staff members after charges were filed.

Both women at the meeting were “intimidated and frightened” by McEntee’s alleged unbecoming conduct, according to Evans’ letter. His letter says Davis had to be escorted to and from school every day by security personnel until the day she departed from the district.

The superintendent’s letter states the district is not looking for the revocation of his tenure or his dismissal, but his suspension. He alleges in his letter McEntee disseminated “false statements” about the vice-principal. Evans’ letter fails to provide any specifics.

McEntee did not respond to a call for comment on Friday.

Members of the Paterson Education Association have rallied behind McEntee calling the charges against him “bogus.”

“Everything we did was protected union activity. If given the choice to do it again, we’d do it over again just the same,” said McEntee in a big rally outside of the district’s central office last Monday just minutes before the school board certified tenure charges against him following a closed-door meeting.

McEntee has said the district is targeting him for standing up for teachers. He has been a vocal critic of the way Evans has been running the district. He even organized a vote of no confidence in the superintendent.

School board members have been silent on the controversy. Robert Murray, counsel for the Paterson Public Schools, citing a state statute, said board members could not comment on the matter last Monday.

Davis has been tough with teacher evaluations. At least one source described her evaluations as “unfair.” When Marc Medley, principal of Frank Napier Academy, held a farewell breakfast for her on Thursday at 7:30 a.m., most teachers boycotted the event.