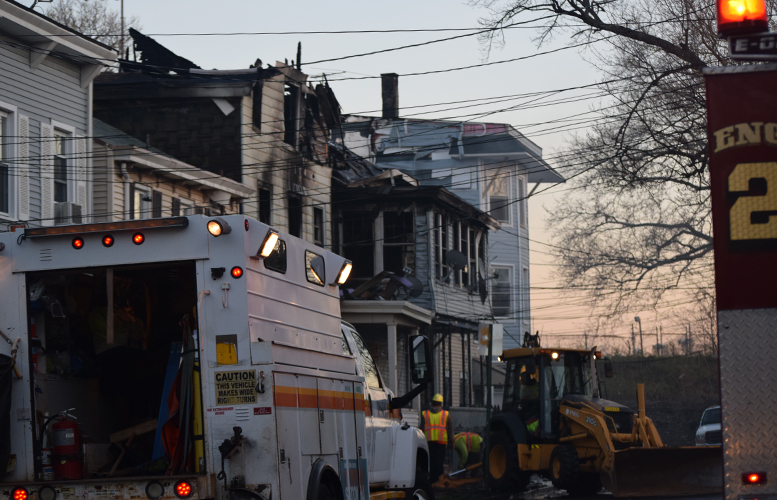 A massive blaze that started at an abandoned home on Rose Street destroyed three homes and damaged another eight. 2 firefighters and 2 civilians suffered injuries in the blaze, according to deputy fire chief William Henderson.

5 families or 16 people have been displaced, said Erica Viviani, a spokeswoman for the American Red Cross, by the four-alarm fire. She said the displaced residents are being provided temporary lodging, food, and clothing.

Firefighters arrived at the scene at about 2:30 p.m. to find three houses – 21, 23, and 25 Rose Street – fully engulfed in flames. The fire started at the vacant home at 23 Rose Street and the flames from it consumed homes on both sides, according to the Passaic County Prosecutor’s Office.

“We had three houses burning on arrival and it was starting to spread to fourth and fifth on both sides. We immediately protected both sides,” said Henderson. He said firefighters saved the fourth and fifth homes on both sides of the inferno. It was tough for fire engines to get to the scene due to vehicular traffic gridlock in the area, he said.

Henderson said one firefighter suffered a shoulder injury from a fall and another had to be evaluated for blood pressure. The two civilians were treated for injuries.

All three homes are being demolished on an emergency basis, according to officials. Wayne-based Vecharello Contracting was at the scene this evening to demolish the three homes whose roofs collapsed as a result of the fire.

Carlos Rodriguez, who lived at 21 Rose Street for 17 years, said he lost everything in the fire. He said he was at work when he received a call from the people living on the first floor of the home that the house has caught on fire.

“All I have is my clothing,” he said drawing attention to his gray hoodie. “I’m waiting for somebody to rent.” While he searches for a place to call home, he was provided a voucher by the Red Cross for temporary lodging at a hotel, he said.

Rodriguez won’t be able to rebuild the house, he said, because the bank has taken ownership away from him through foreclosure.

Mohammed Rafique, the landlord of 25 Rose Street, had a representative of his insurance company at the scene.

“I’ll rebuild,” said Rafique. He will have to work with his insurance company to rebuild the home, he said.

Rodriguez’s wife Marilyn Santiago said squatters have been a problem at 23 Rose Street. “I kept calling the mortgage people for 23 Rose Street and the city to come and close it up. The city closed it up at the beginning then the mortgage took over,” she said. “They were still getting in through the back. And they were doing drugs, everything.”

“It has been a problem. It was a problem in December,” said her son Jose Correa. He said the mortgage company boarded up the front of the home and left the back un-boarded last week.

Santiago said there was a fire at 23 Rose Street in December. Rafique said the siding of his home was damaged and he only recently repaired the roof and siding of his property.

Correa said the city should have knocked down the problem house back in December. The city demolishes home when it becomes an imminent hazard.

Had the city knocked down the problem property in December it could have averted the fire today, said the son.

Luis Velez, 5th Ward councilman, who represents the area, said he had the city board up the house multiple times. He said the squatters seem to find a way back inside. “They are angry because numerous times I closed that house,” he said. “We closed it again. Then we closed it again. Squatters go in and do whatever they want.”

The families of the two occupied structures lost their belongings to the flames. However, Rider Torres, who lives at the rear house of 25 Rose Street, was lucky. His tiny home was not touched by the flames.

Torres said he was told he can reoccupy his home once the two-story structure in front of it is demolished.

Santiago and her family will stay at a hotel until Monday, she said, when she plans to seek assistance from Velez to find a new apartment.

The cause of the fire remains under investigation, said Henderson. The Passaic County Prosecutor’s Office said the cause has yet to be determined.