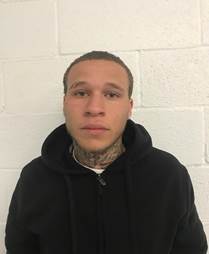 A city man allegedly attempting to package drugs at the vacant second floor of a North 3rd Street house was arrested on Saturday morning, according to Passaic County Sheriff Richard Berdnik.

Emanuel G. Bush, 24-year-old, was arrested at around 9 a.m., when area residents reported him entering and exiting the vacant second floor of 72 North 3rd Street with a silver handgun, authorities said.

Detective Jose Vargas, officers Chazz Gonzalez,  Francesca Vollaro, and Kiril Sekulovski were at the residence conducting an investigation for a stolen vehicle at the address. When area residents told them, an individual called “Manny,” was observed entering the second floor with a silver handgun.

Detective Vargas went up to the second floor. He found the front door open and a table in plain view with empty zip lock baggies, a scale, and a submachine gun. After announcing police presence, he entered the apartment.

The submachine gun had an extended magazine and contained hollow point bullets, authorities said. Vargas secured the firearm. Minutes later, Bush walked towards the house and upon making eye contact with officers he froze and stutter-stepped as if to run. Vargas approached Bush and was informed he stayed upstairs on the second floor.

A third weapon was located at the house, authorities said.

“Three guns off the streets is a positive victory against street violence,” Berdnik said.