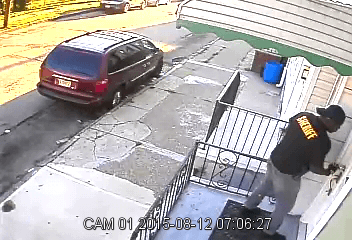 A city man was arraigned on Thursday for allegedly posing as a Passaic County Sheriff’s Officer to target a home in Paterson looking for money, according to federal authorities.

Authorities said Thompson was arraigned at the Newark federal court on Thursday morning. The charges against him stem from an August 12, 2015 incident.

Thompson and an alleged accomplice Clemente Carlos, 30, of Newark accosted a woman and her infant leaving their 20th Avenue home at around 7 a.m. Both men were dressed in Passaic County Sheriff’s Office uniforms. Posing as law enforcement officers, the two men led the victim back to her apartment and got inside the residence.

Thompson allegedly pointed a handgun at the woman’s brother sleeping inside the apartment. He allegedly used a zip-tie to restrain the brother.

Thompson and Carlos were looking for money at the house. Both men searched the house and then left.

Police arrested Thompson outside his East 25th Street house in Paterson on December 2, 2015. A loaded revolver was seized from his bedroom, authorities said.

Carlos was arrested exiting his house in Newark on December 7, 2015. He pleaded guilty to conspiracy to commit Hobbs Act robbery and is scheduled for sentencing on May 2, 2017.

Carlos faces a maximum of 20 years in prison and a $250,000 fine. Thompson faces 37 years or life in prison if convicted on the charges, authorities said.