Almost a year after the city rolled out its municipal identification card program to make it easier for undocumented immigrants to report crime and engage in commerce, a resolution before the City Council is seeking to collect a modest fee to cover expenses of issuing the cards.

This is partly the result of the program’s success. Health and human services director Donna Nelson-Ivy, whose department runs the Paterson Municipal ID Program, said almost 3,000 identification cards have been issued thus far.

Nelson-Ivy estimated the city would issue just 500 when council members approved the program in May of 2016. She said the proposed fees are being instituted to cover the expenses to run the program. 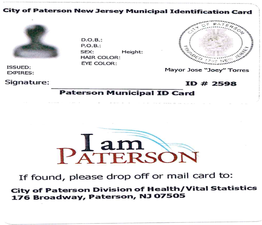 Under the proposed fee schedule residents will pay between $5-$10 for an ID:

The new ordinance before the council also has seven separate exceptions to the fees. For example, those who are homeless, unemployed, or receive food stamp qualify for fee waivers.

“The popularity of the Municipal Identification Card has resulted in financial strain on the Department of Health and Human Services’ limited resources,” reads the ordinance. The program is described in the ordinance crafted by mayor Jose “Joey” Torres’ administration as “widely successful.”

The identification cards are being issued to residents without charge at present. 2,786 identification cards have been issued since the program started in middle of 2016. The administration has a target of 5,000 cards to be issued by the end of 2017, according to officials.

Fees will go into effect on July 1st, 2017, according to the ordinance.