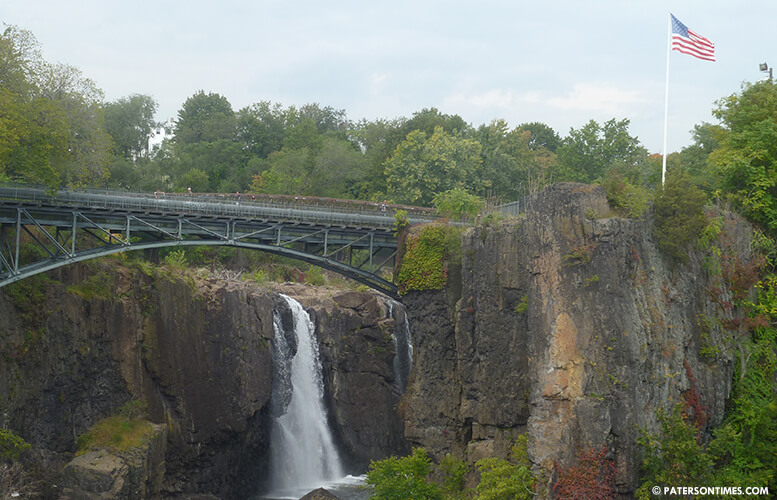 Almost 200,000 people visited the Great Falls National Historical Park in the past year, but a good number of them spent very little time in America’s first planned industrial city. Visitors often enter Overlook Park, snap a picture with the statue of Alexander Hamilton, and leave the city.

“We know we have a problem,” said Don Smith, former executive director of the New Jersey Hall of Fame, on Monday night at the Paterson Museum. He said one way of solving the problem is by bringing four halls of fame to the Great Falls to keep visitors in the city.

“We are attracting, but people are not spending. You want people to spend money in Paterson,” said Smith. Advocates of the halls say once visitors start to spend money at local businesses this will result in a jobs boom in the area.

“It’s going to create jobs,” said Michael Symonds, who has been lobbying to bring the halls to the city for years. However, his group needs to conduct a feasibility study to figure out where the halls should be located. Mayor Jose “Joey” Torres has agreed to provide space for the halls inside the fieldhouse at the Hinchliffe Stadium once the historic ballfield has been renovated.

The fieldhouse space is not likely to accommodate all four halls of fame. Smith said part of having the halls here should include a small theater to show old historic footages of baseball games and films.

Symonds said the feasibility study will help to determine where the halls should be located. He said the project will likely receive a boost from private donors, former Patersonians and others, to see the halls close to the park.

“We need to get this feasibility study done to go to big time donors,” said Symonds. He said the cost to conduct the study is $50,000. His group has been slowly raising the funds, but hopes more awareness will assist in donation efforts.

Councilman Andre Sayegh, who supports the plan to bring the halls to the city, plans to assist the group in raising funds. He said on Monday night he intends to contact some of his campaign donors to encourage them to donate to help pay for the study. “We’re going to have to burn the phone lines,” he said.

Sayegh said both the Negro League Baseball Hall of Fame Annex and Inventor’s Hall of Fame have expressed interest in locating to the city. He sees the halls as part of an effort to monetize the Great Falls for the city.

“The Great Falls has to be a revenue stream for our city,” said Sayegh. “We got to start thinking big picture Paterson.”

Smith suggested having all four halls of fame at the Great Falls will be an economic game changer for the city. He compares it to the opening of the Mayo Performing Arts Center in Morristown in the 1990s.

Smith, who played a role in the effort, said, “The city was on the ropes economically. People didn’t want to come to Morristown.” This was in 1994. Now, Morristown is one of the most desirable places in New Jersey. He said the initial seed money for taking an old movie theater and turning it into a performing arts center came from the government, but the rest of the project was funded by private money.

The group hopes to see the halls by the falls in the next five years. “This is going to happen,” said city resident Michelle Vargas, who is part of the steering committee to bring the halls to the falls.

Correction (Aug. 29, 2017): A previous version of this report misspelled the last name of Michelle Vargas. This has been corrected.