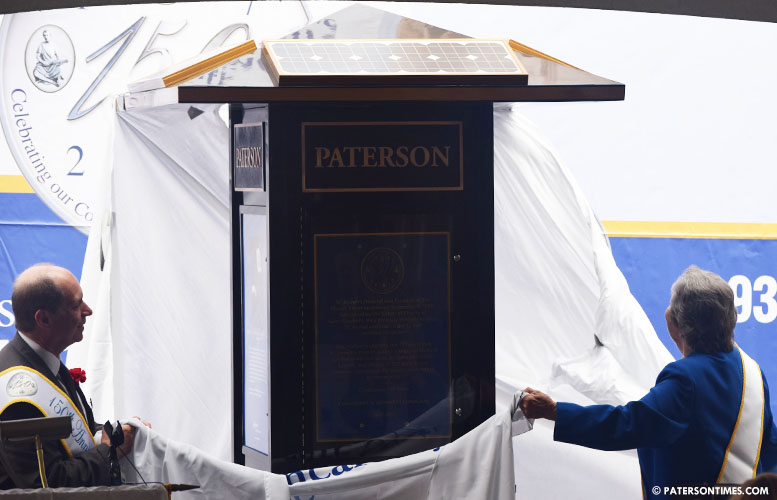 In 1867, a small wooden house stood on Church Street, where a group of nuns opened a 12-bed hospital to treat the town’s injured and poor. This tiny operation, almost 150 years later, grew to become St. Joseph’s Regional Medical Center. In celebration of its 150th anniversary, a historic marker was unveiled at the site on Monday morning, recognizing the hospital’s humble start.

Though the hospital has grown its core mission to treat the city’s poor and injured has withstood the test of time. “The front door, the back door, the side doors, and all the windows are open to welcome you. The people of Paterson are always welcome at St. Joseph’s,” said sister Rosemary Moynihan, general superior of the Sisters of Charity of St. Elizabeth, which founded the hospital on September 8th, 1867 at 47-53 Church Street.

Sisters of Charity of St. Elizabeth continues to sponsor the hospital. 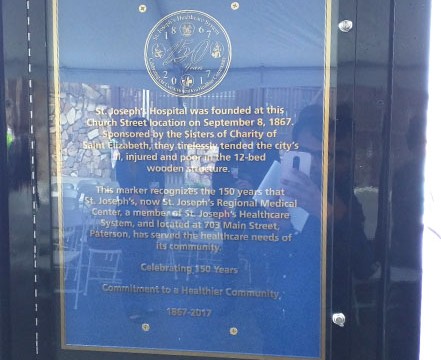 Moynihan said the sisters came to Paterson at the invitation of William McNulty, pastor of St. John’s Cathedral. “His people were being hurt at the mills and there was no cure for them,” said Moynihan, sharing a small piece of the hospital story with a group of 100 people who gathered for the marker unveiling on Church Street between Market and Ellison Streets. Dr. John Quinn and the sisters cared for 102 patients in the first year of the hospital’s existence, according to the hospital.

“It’s been a long journey for St. Joseph’s,” said Kevin Slavin, president and chief executive officer at St. Joseph’s Healthcare System. He said the hospital now serves not only Paterson, but the northern New Jersey area.

Patients from other countries seek treatment at the hospital, said Slavin. His hospital has received national attention for its innovative Alternatives to Opiates Program, a program where doctors use non-opioid medications for patients’ pain management. This program comes at a time when the country is experiencing an opiate epidemic fueled by heroin.

Mayor Jose “Joey” Torres described the hospital as a “precious jewel” and its history a significant part of Paterson’s glorious past. There were three hospitals — Paterson General Hospital, Barnert Hospital, and St. Joseph’s Hospital — in Paterson at one point; however, now St. Joseph’s, the city’s first hospital, is the sole remaining.

“It’s bigger, it’s more expanded, but it has not lost its character,” said Rep. Bill Pascrell. Institutions lose their character when they grow big, he said, however St. Joseph’s has managed to retain its mission and character.

The original site of the hospital is now occupied by apartments at the converted Fabian theater designed by Fred Wesley Wentworth. The hospital, in need of a larger space, moved from Church Street to Main Street in 1868. It has undergone several expansions over the course of the past decades.

The historic marker in front of the Fabian building provides passersby with a brief history of hospital.