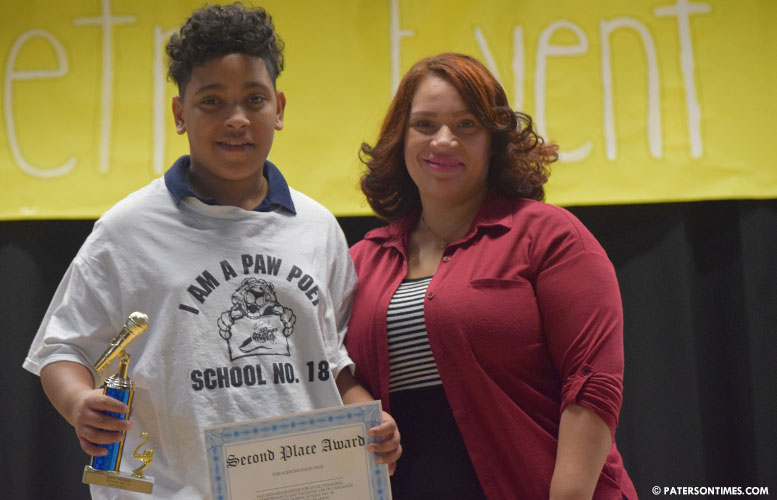 Jeremy Rivera’s mother, grandparents, and aunt came out to School 18 to hear the fourth grader perform his poem “Forgiveness.” The focus of his poem was a family member not present at the packed auditorium on Friday morning – his father.

“Was I a mistake?” asks the 12-year-old, who never met his father, in his poem. He poured his heart out to an audience of more than 200 students and their family members. Judges for the Paw Poets contest at the school awarded him second place for his pathos filled poem.

“A lot of people are in my situation. It wasn’t something scripted or anything,” said Rivera, tearing up, after the winning second place. While performing the poem he had to maintain good posture, articulate, and capture the audience.

“There are even adults that can’t do that. He did. Which shows a lot,” said Natividad Montanez (pictured, right), Rivera’s mother. “Growing up, we always think about being number one, but it’s okay to be number two.”

Montanez said being in the school’s nascent Cougar Poets Club – the school’s symbol is the cougar — has helped her son build his confidence and self-esteem.

Sandra Nunez, a guidance counselor, and Jennifer Rey, second grade English teacher, founded the club to do just that.

“Our kids sometimes have difficulty expressing themselves,” said Nunez.

Rey said the club provides a judgment free space for the students express themselves in front of their peers.

“Everybody feels safe to express their feelings and their emotions,” said Rey.

The club is in its second year. Students meet one hour once a week from January to April to write poetry. Nunez said students meet more frequently in April to practice their poems on stage and get a handle of their nerves.

Last year, the club had 20 students, this year the number increased to 40. She said the club initially targeted students in middle school grades, but this year expanded to include second to fourth grade students.

Vanessa Gonzalez, a third-grade math teacher, and Jenesis Ramirez, a fourth-grade English teacher, have been teaching the students the elements of writing poetry. Students were taught rhythm and meter and different types of poetry like lyrical, haiku, and free verse.

Out of the 21 students who took part in the morning contest — an afternoon session was for higher grade students — few of them had haikus, noted Ramirez.  Poems by the students had to do with seasons, summer break, friendship, and pets. Besides the mechanics of poetry, the teachers taught the students presentation and public speaking skills under the guise of performing their poems in front of an audience.

“From the beginning, they were so shy, to see them break out of their shyness and evolve has been a cherishing experience,” said Ramirez. “We’re showing them how to do expressions and how to make the audience feel what they’re feeling.”

“It took a lot of encouragement,” said Rey. “We have certain rules. We can’t laugh at each other’s feelings and we can’t make fun of each other.”

Gonzalez led the students by example. She was one of several instructors to read their own poems in front of the audience. Her poem captured her life growing up as the child of an immigrant. “It’s to express themselves and express their feelings. Sometimes it’s hard for these kids to do that. Writing is a way for them to share that,” she said.

The students were free to select their own topic for their poems, said Rey. Often artistic works by students depict the city’s social problems. The works of the Paw Poets, students in 2-4 grades, depicted none of the social ills of the city for a change.

Rivera said guidance from the teachers helped him to get his feelings out and onto the paper. “I’ve always been writing poetry just secretly,” he said.

Does he secretly wish his father were in his life? “Not anymore. I don’t need that. I have my mom,” he said. As the title of his poem suggests, he appears to have forgiven his father. His mother declined to divulge the details of the situation surrounding the boy’s father.

Rivera said he was happy to see his grandfather and grandmother in the audience. He said his grandfather, who is strict, gave him a hug when he came down from the stage after reading his poem.