After years of lobbying, Paterson resident getting speed hump for his street | Paterson Times 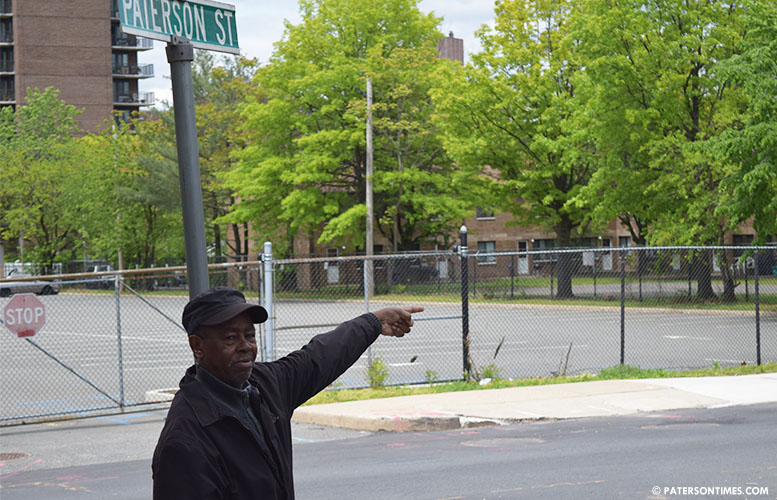 After years of requesting and then demanding speed bumps to slow down cars zooming through Paterson Street, city resident Donald Lynch is expected to get a speed hump next week, according to mayor Jose “Joey” Torres and public works director Manny Ojeda.

Lynch said he was told the traffic calming measure was in the works for the past two months. He said he received a call from the public works director telling him installation is expected to be on May 22nd, 2017.

“I’m very happy. People use this as a speed way. It doesn’t make sense,” said Lynch, 75, on Friday afternoon. He lives at the Triangle Village and has witnessed the difficulties seniors, students, and children have had in crossing the street while cars speed through Paterson Street to get to River Street.

“It’s all the time,” added Yuri Fujita, secretary for the Our Lady of Victories Roman Catholic Church, speaking of speeding vehicles. She said sometimes parents pushing strollers risk being hit by cars while crossing at the intersection of Fair and Paterson Streets.

Lynch, who has lived in the Silk City for 66 years after moving from North Carolina, said, in the summer children from the apartments play outside and dodge cars to retrieve their balls when it lands in the roadway.

“They won’t even stop at the white lines,” said Lynch mentioning a crosswalk that has a stop post urging motorists to halt for pedestrians. “This street is like a death trap,” said Lynch. He constantly complained about the speeding problem on his street at City Council meetings.

Lynch says mayor Jose “Joey” Torres promised him speed bumps on his street during National Night Out in 2014. He badgered the mayor’s administration for the past almost three years for speed bumps invoking the promise.

Law director Domenick Stampone on numerous occasions gave him the same explanation. He would tell Lynch the city can install speed humps only if the volume of cars going through a stretch is fewer than 3,000 vehicles per day.

“Corporate law was making excuses,” remarked Lynch (pictured). Stampone though was merely reading the New Jersey speed hump law. Torres last week at his second town hall meeting said a traffic study had to be conducted prior to installing speed humps on any streets.

“This is Route 80,” added Lynch’s neighbor who declined to give her name. She said she has lived on Paterson Street for 27 years. “It’s about time,” she said when told her block may soon get a speed hump.

Torres said this is the first time in decades the city is putting up a speed hump. “We never did it in Paterson,” said Yu, who has been working for the city since 1990. “We receive a lot of requests.”

There’s a reason for not installing speed humps. For example, during the winter speed humps require snow plows to make adjustments. There’s also cost for speed humps. Yu said the cost for the Paterson Street hump is $7,000.

Lynch said he hoped the city would install three speed bumps. He said he wants the city to install signage at the location warning motorists of the speed hump. Although his neighbors have been complaining about speeding cars, none of them have done much to address the issue.

The neighbors often complain to him when he speaks to them, said Lynch. He is well-known by residents who live in the vicinity of the apartment complex.

When asked about the timing of the speed hump installation, seven months before the 2018 mayoral campaign, Lynch appeared indifferent. He said all he cared about was that it was finally happening.

Some years ago, Lynch lobbied to turn the narrow, tree dotted street into a one-way, he said. Neighbors were waking up to find their car’s side mirror broken or vehicle damaged, he said. As the city addresses the speeding problem, Lynch has set his target on trucks.

“They don’t pay no mind at all,” said Lynch as a dozen or so large trucks passed through the roadway heading towards River Street. He reckons some of those trucks are over four tons in weight – there’s a sign on the street that prohibits vehicles over four-ton to use the roadway.

Lynch claims those trucks are breaking local law by going through Paterson Street. He has been promised better enforcement, but has yet to see it. He appeared content with his small victory in making his street – Paterson Street – a much safer road to cross for seniors and children.