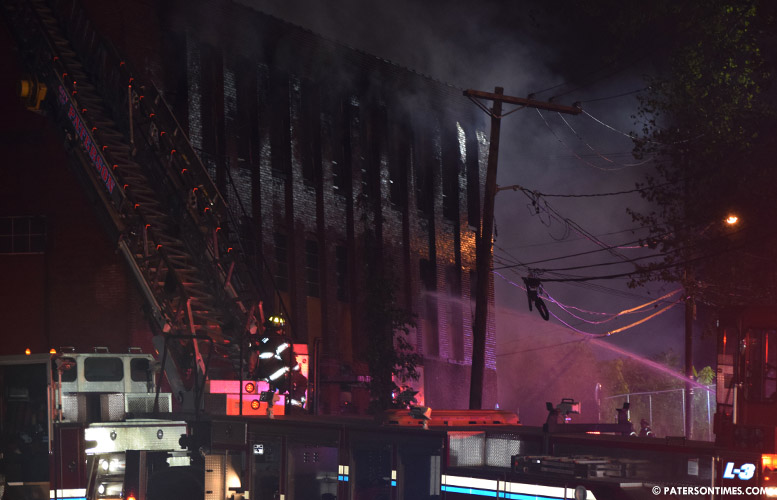 Firefighters are battling a large blaze at an old mill building on Ryle Avenue on Monday night.

Fire at the large abandoned mill on the corner of Ryle Road and Ryle Avenue came in at about 9:13 p.m. Firefighters found the three-story building fully engulfed in flames, according to deputy fire chief Frank Calamita. Fire reached third alarm.

Those living in homes on Ryle Avenue were forced to evacuate out of their dwellings. One man at the scene said firefighters and police officers knocked on doors to get residents out of the houses. Miguel Rivera, who lives on Ryle Avenue, said he was allowed back into his house at 11 p.m. last night.

“The power is still out. We don’t have gas,” said Rivera on Tuesday morning as firefighters continued to spray the flames. He said the lack of electricity has made things difficult for his mother, who takes insulin which have to be kept in a fridge.

Rivera was charging his phone using his car. He said firefighters were battling the flames for the whole night. “It was open flames this morning,” he said. “Flames were still going.” He said the noise outside prevented him and other family members from sleeping at night; he is missing work for the day.

Rivera wasn’t alone firefighters and police evacuated more than a dozen people from the Ryle Avenue houses. The American Red Cross of New Jersey says it is helping 19 people or 9 families with emergency assistance including temporary lodging.

Calamita said firefighters continue to battle pockets of deep seated flames inside the building. “It’s too dangerous to send guys in there,” he said. He said the roof of the structure collapsed.

The deputy fire chief said the building is likely a total loss. The city will have to decide to demolish the structure in order to put out the flames.

It’s not clear what started the flames at the abandoned building. “Crackheads be in there,” said Rivera. He said he often saw people going in and out of the building. At times some of them would yell at others on the street from the windows of the building, he said.

The old mill building was one of 15 sites the city put in a grant application with the state to acquire two months ago.